ATWOOD — The McKenzie Rebels traveled to Atwood on a rare Thursday night contest due to a TSSAA ruling earlier this year requiring schools to schedule at least one Thursday game to alleviate a shortage of game officials. 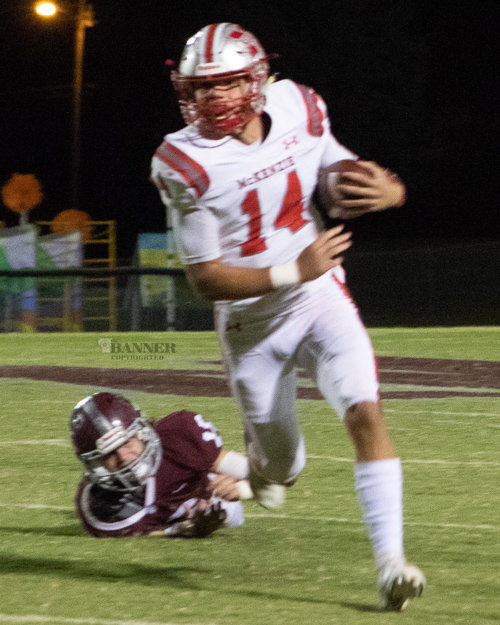 Tate Surber (14) picks up yards against the War Eagles.
Photo by Jessa Potts 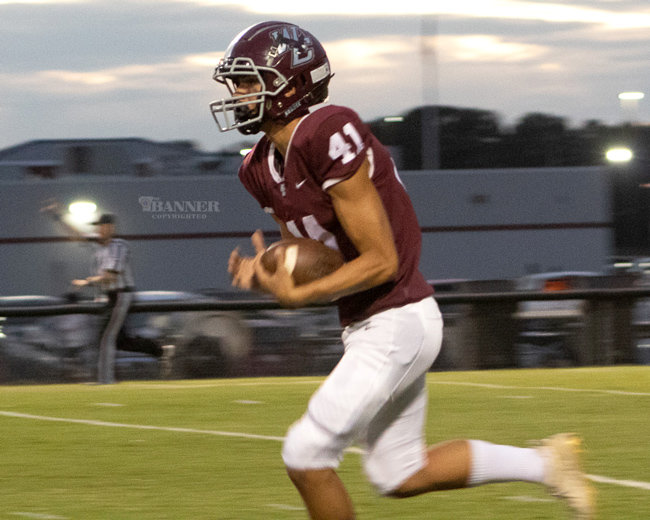 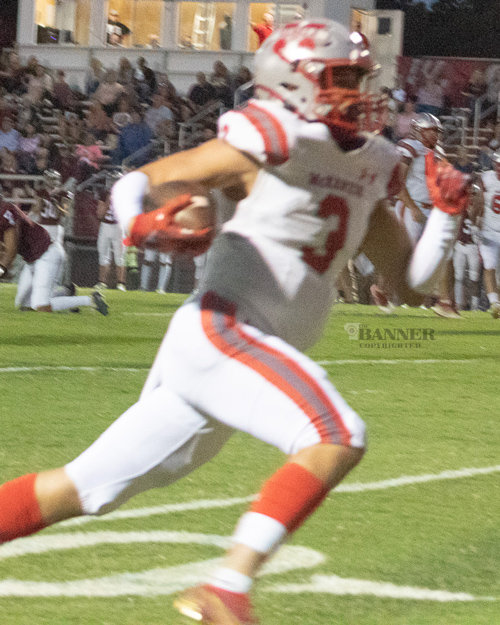 Zach Aird (3) heads for a TD after a catch.
Photo by Jessa Potts
Previous Next
Posted Tuesday, September 27, 2022 1:53 pm
By Jim Potts
jpotts@mckenziebanner.com
ATWOOD — The McKenzie Rebels traveled to Atwood on a rare Thursday night contest due to a TSSAA ruling earlier this year requiring schools to schedule at least one Thursday game to alleviate a shortage of game officials.
The Rebels were hitting on all cylinders in a 51-0 win over the War Eagles. Neither team crossed the 50-yard line the entire game. McKenzie’s defense kept West Carroll on their end of the field while the Rebel Offense camped out in the War Eagle end of the field all night.
McKenzie exploded for 30 points in the first quarter setting the tone for the game. West Carroll attempted an onside kick on the kickoff, but it was recovered by McKenzie near midfield. Two passes later the Rebels were knocking at the door with Marquez Taylor scoring a 7-yard touchdown. Zach Aird was good on the extra point for a 7-0 Rebel lead with 11:17 left in the opening quarter.
West Carroll took the kickoff and went three plays and faced a 4-5 play. They opted to punt which was blocked setting McKenzie at the War Eagle 19-yard line. On first down, Jackson Cassidy went to Zach Aird for a 19-yard touchdown with 8:42 left in the first quarter. Aird was good on his second PAT attempt increasing the lead to 14-0.
West Carroll went three and out again with their punt attempt blocked for a second time. McKenzie got the ball at the West Carroll 21 and scored on a 21-yard Jackson Cassidy to Marquez Taylor touchdown pass. The extra point attempt was good by Aird for a 21-0 Rebel lead with 5:42 remaining in the opening frame.
The War Eagles lost yardage on their next possession and faced a 4th down and 18 play. Their punt was successful, but the Rebels still got the ball in good field position at the War Eagle 34 yard line. A 15-yard penalty pushed McKenzie back to the 49 yard line from where Jackson Cassidy took the ball 49 yards for a touchdown with 2:26 left in the quarter. Aird’s extra point was good for a 28-0 Rebel lead.
West Carroll’s ensuing possession resulted in a safety when Drew Chappell tackled War Eagle quarterback Jaxon Mims in the endzone for a safety bumping the score to 30-0 with little time left in the first quarter. Due to the game rules on a safety, the War Eagles had to kick off to the Rebels with Etijay Tharpe taking the ball back nearly 60 yards setting up another McKenzie touchdown. On the first play of the second quarter, Cassidy hit Rashad McCreary on a 24-yard touchdown pass with 11:30 left in the second quarter. Aird was good on his fifth extra point for a 37-0 Rebel lead. This touchdown triggered the mercy rule clock which ran constantly for the remainder of the first half and all of the second half. McKenzie began substituting when the running clock started.
After losing yards on the ensuing possession, West Carroll punted short setting the Rebels up at the West Carroll 35-yard line. After a Marquez Taylor run, Jackson Cassidy got his fourth TD pass connecting with Zach Aird on a 19-yard TD with 6:50 left in the half. Aird’s extra point was good for a 44-0 lead. The two teams swapped possessions for the remainder of the half with the Rebels leading 44-0 at halftime.
The War Eagles got the ball first to start the second half, but did not keep it long as freshman Timmy Arline intercepted a pass on first down giving the Rebels possession at the West Carroll 31 yard line. With the Rebels facing a 4th and four play, Tate Surber ran 9 yards securing a first down for McKenzie. Two plays later, Surber found Stafford Roditis for an 11-yard touchdown with Aird’s extra point good for a 51-0 lead with 6:35 left in the third quarter.
With a running clock, McKenzie played a lot of different people with the remaining time left on the clock and secured the win. McKenzie improved to 6-0 on the season while West Carroll falls to 4-2 on the season.
McKenzie’s defense was very dominating in this game holding the War Eagles to -9 yards rushing and 16 passing yards. The Rebel offense got the job done rolling up 97 rushing yards and 179 passing yards on the night. Jackson Cassidy led the way with 7 of 7 passing for 130 yards and four touchdowns while rushing one time for 49 yards and a touchdown. Zach Aird led the receiving with 4 catches for 57 yards and two touchdowns. Aird was a perfect 7/7 on extra point attempts on the night.
This week, McKenzie travels to Dresden for a key region showdown with the Lions. The winner will have control of first place in the region. West Carroll travels to Lake County for a region showdown.