DRESDEN (September 30) — In a much talked about region contest, McKenzie’s Rebels defeated the Dresden Lions 40-7 to take command of the Region 6A lead. Jackson Cassidy and Marquez Taylor both had big nights against the Lions. 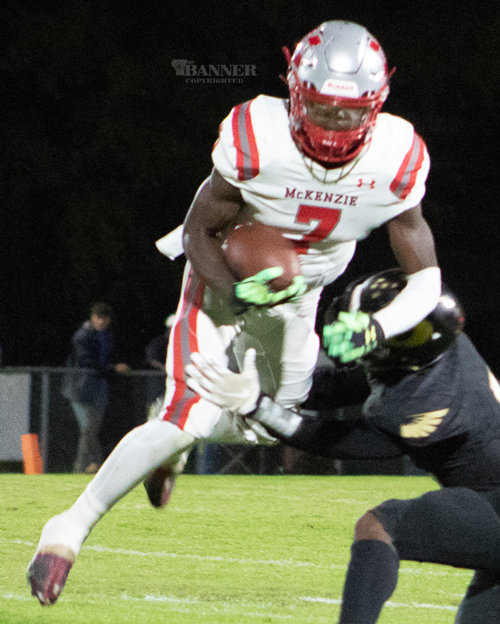 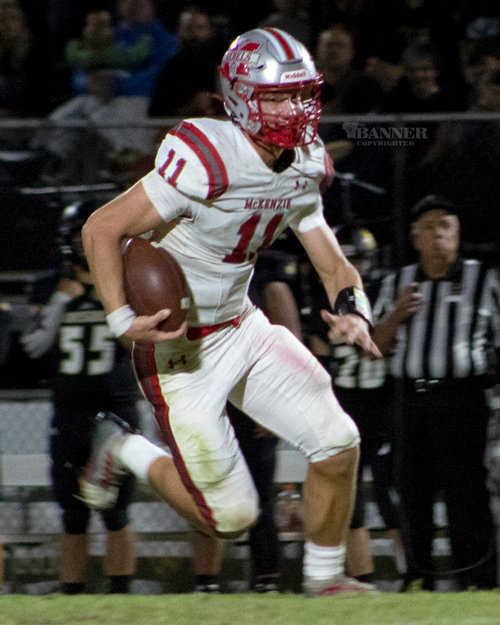 Jackson Cassidy (11) gets some of his 151 rushing yards.
Photo by Jim Potts and Jessa Potts/The Banner 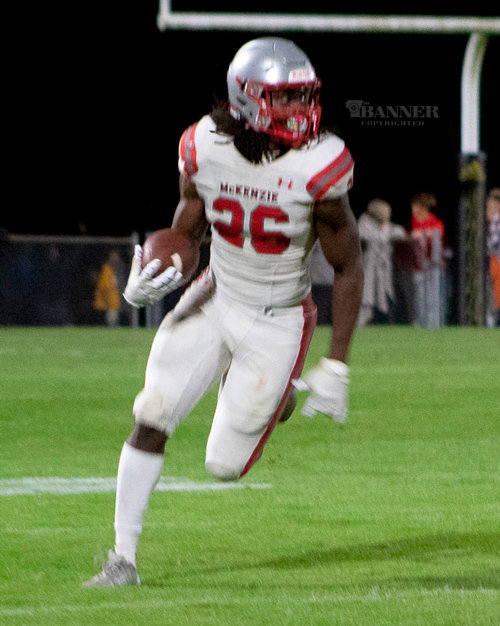 Rashad McCreary finds running room against the Lions.
Photo by Jim Potts and Jessa Potts/The Banner
Previous Next
Posted Tuesday, October 4, 2022 2:58 pm
By Jim Potts
jpotts@mckenziebanner.com
DRESDEN (September 30) — In a much talked about region contest, McKenzie’s Rebels defeated the Dresden Lions 40-7 to take command of the Region 6A lead. Jackson Cassidy and Marquez Taylor both had big nights against the Lions.
The Rebels won the coin toss and elected to defer to the second half so Dresden got the ball first to start the game. It was the Lions who struck first two plays after receiving the kickoff when Dresden scored on a 92-yard touchdown play with the extra point good for a brief 7-0 lead.
The Rebels drove to the Dresden 45 before being intercepted and giving the ball back to the Lions. The Rebel defense got to work forcing the Lions to punt from deep in their own territory. McKenzie got the ball in good field position scoring a few plays later on a keeper by Jackson Cassidy for a 39-yard touchdown. Zach Aird’s extra point attempt was good to tie the game 7-7 with 1:42 left in the first quarter.
Dresden drained the remainder of the first quarter clock but, got nowhere due to a third down quarterback sack to end the quarter. The second quarter opened with Dresden punting to the Rebels on a fourth and long play.
A few plays later, Marquez Taylor was in the endzone on a 3-yard touchdown with Aird’s PAT good for a 14-7 lead with 8:53 left in the second quarter. After another short Dresden possession, the Rebels got the ball near midfield draining several minutes off the clock with a drive resulting in another 3-yard touchdown by Marquez Taylor. A two-point conversion attempt was no good with the Rebels leading 20-7 with 2:06 left in the half.
Zach Aird ended Dresden’s next possession intercepting a Lion pass at the Dresden 35 giving the Rebels a short field to work with. They drove to the Dresden 9 yard line and settled for a 27-yard field goal by Aird for a 23-7 lead with just 6 seconds remaining in the half.
McKenzie got the ball first to begin the second half and drove to the Dresden 20 where Aird nailed a 31-yard field goal with 6:08 left in the third quarter for a 26-7 Rebel lead.
The Rebels wiped out Dresden’s first possession of the second half sacking the quarterback twice for big losses forcing a fourth down and long punt.
McKenzie launched another time consuming drive that rolled into the fourth quarter and a Rashad McCreary touchdown that was called back on a penalty. Two plays later Dresden intercepted a Jackson Cassidy pass. The Lions went four plays and turned the ball right back to the Rebels on downs.
This drive went seven plays resulting in a Jackson Cassidy to Etijay Tharpe 21-yard touchdown pass. Aird’s extra point was good for a 33-7 lead with 6:53 left in the fourth quarter.
The Rebel defense remained stiff resulting in another short possession for Dresden. Their punt went short giving McKenzie possession at the Dresden 41. Five plays later, Cassidy was in the endzone again on a 19-yard run. Aird’s kick was good for a 40-7 lead which ended up being the final score.
The McKenzie defense spoke loud and clear in this contest holding an opponent to negative yardage running the football. Dresden was -3 yards rushing while West Carroll was -9 yards rushing the previous game. The Rebels did give up 146 yards passing and a score, but allowed no first downs on third down plays.
The Rebel offense was dominating pounding out 295 yards rushing and 178 passing yards. Jackson Cassidy had a big game completing 13-21 passes for 178 yards and a touchdown while giving up two interceptions. Cassidy also had 11 carries for 151 yards and two touchdowns. Marquez Taylor ran 23 times for 131 yards and a pair of touchdowns.
Tate Surber recorded four tackles including a sack and two tackles for loss While Drew Chappell had two tackles and two assisted tackles along with a sack and two tackles for loss.
McKenzie returns home this week to host Gleason while Dresden hosts McEwen. Game time is 7 p.m. for both games.