McKENZIE (November 18) — McKenzie Rebels (13-0) advance to the semi-final round of the Class 1A football playoffs after an impressive 20-18 win over Fayetteville at Rebel Stadium. The Rebels met an outstanding team from Fayetteville, who matched the Rebels in skill on the playing field in this third round of playoffs. Rebel fans showed up and cheered for their home team despite the temperatures in the upper 20s. 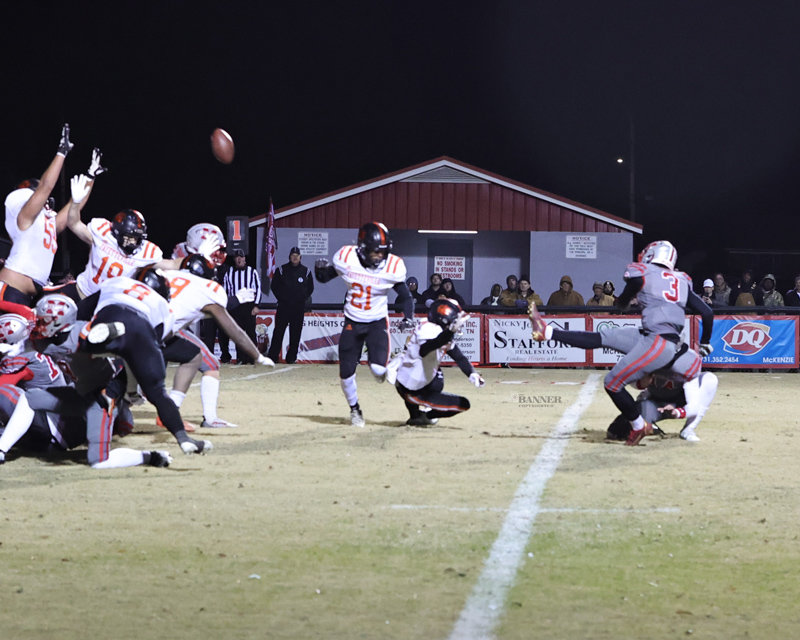 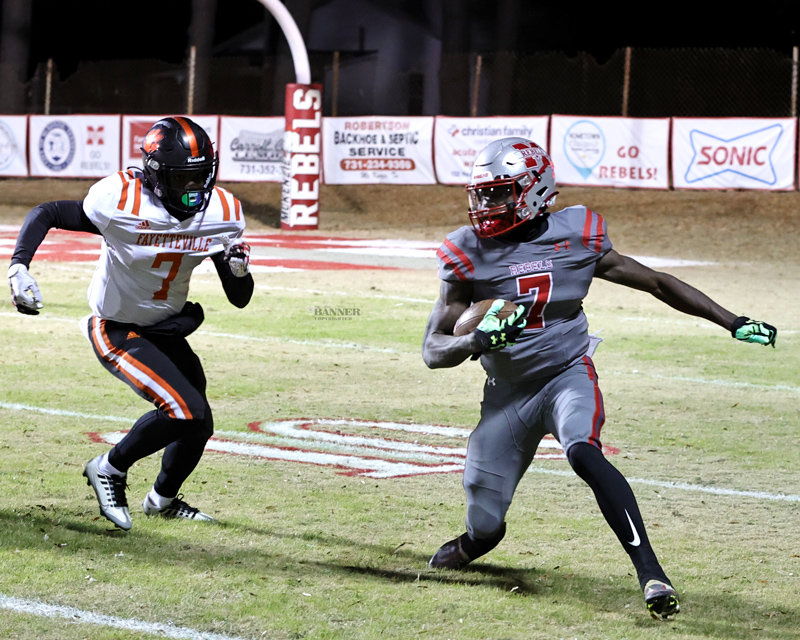 Marquez Taylor rushes for the Rebels. 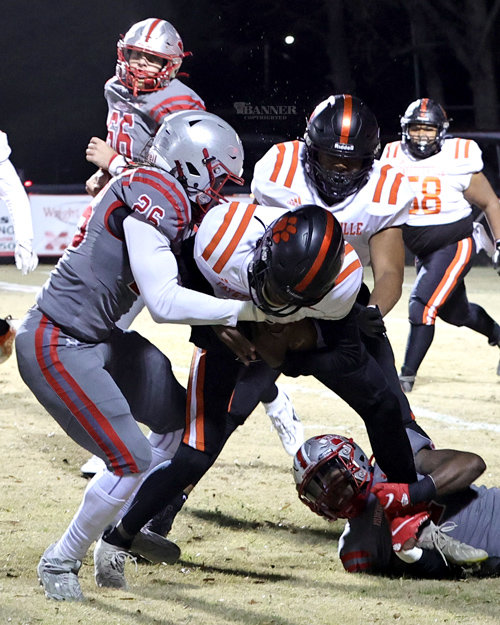 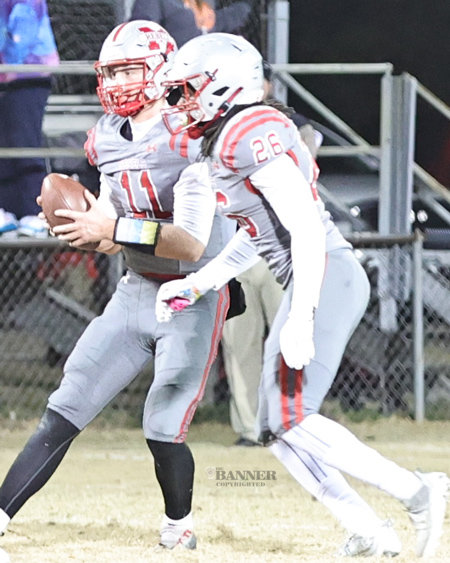 QB Jackson Cassidy looks for a receiver before rushing down field in the waning moments of the contest. 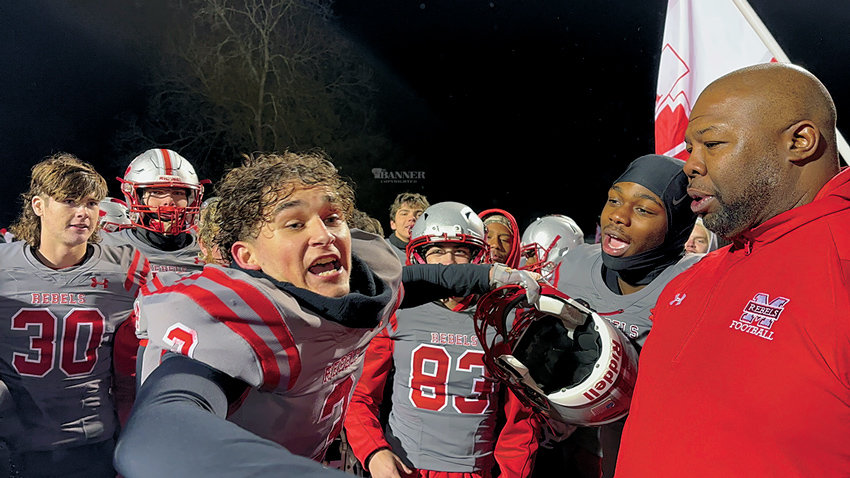 Aird (#3) celebrated in the post-game gathering on the field.
Previous Next
Posted Tuesday, November 22, 2022 3:58 pm
By Joel Washburn
washburn@mckenziebanner.com
McKENZIE (November 18) — McKenzie Rebels (13-0) advance to the semi-final round of the Class 1A football playoffs after an impressive 20-18 win over Fayetteville at Rebel Stadium. The Rebels met an outstanding team from Fayetteville, who matched the Rebels in skill on the playing field in this third round of playoffs. Rebel fans showed up and cheered for their home team despite the temperatures in the upper 20s.
The Rebels controlled the scoreboard until 8:19 in the fourth quarter, when Fayetteville went ahead on a 14-yard touchdown pass. The two-point conversion failed and the score stood at 20-18. Faced with a win or go home situation, the Rebels found a way to win with the seasoned players.
Wade Comer, head coach for McKenzie, said he had confidence in his senior leadership to find a way to win. With runs and passes, QB Jackson Cassidy advanced his team within field goal range. With just seconds remaining and as the clock ticked down to 4 seconds, Comer called for a timeout. It was Zach Aird’s talent as a kicker that the Rebels depended.
Already witnessing Aird’s 40-yard field goal in the first half, Fayetteville decided to try to ice Aird by calling a timeout. The first successful kick did not count because of the last second timeout. So with Tate Surber holding, Aird booted the winning 20-yard field goal advancing the Rebels to the semi-final round.
Coach Comer said Zach has ice in his veins.
Not only was that the winning kick, it was Aird’s 100th point of the season. At the post-game, mid-field gathering, Comer reminded the players, cheerleaders and fans that there is one more game to get back to Chattanooga, where the state championship is Friday, December 3 at 3 p.m. EST. The team celebrated their win, praised Aird, and prayed the Lord’s Prayer.
The game was won with the true tenacity of the Rebels. It was a culmination of passing, blocking, tackles that led to the win.
The Rebels set the tone early with Marquez Taylor rushing 52 yards from the first play from scrimmage for the game’s first touchdown. Aird added the point-after kick for a 7-0 lead with 10:49 remaining in the first quarter.
Again, Taylor was celebrating in the end zone, on a one-yard TD. Aird added the PAT for a score of 14-0 with 8:25 remaining in the first quarter.
Fayetteville answered with a touchdown by Aljarea Johnson at the 7:20 mark in the second quarter. The two-point conversion failed. Fayetteville again scored with one minute remaining in the first half. The two-point conversion failed and the score was 14-12.
In the closing minute of the first quarter, Taylor fielded the kickoff, a Cassidy pass to McCreary advanced the ball and the team had just seven seconds. Aird was called to successfully boot a 40-yard field goal making the score 17-12 going into the half.
Neither team scored in the third quarter and Fayetteville scored the lone touchdown in the fourth quarter. Again, the attempted two-point conversion failed and Fayetteville led 18-17.
The final score came after big runs by the Rebels, including one by Cassidy to move the team into field goal range for the winning kick.
The Rebels statistics include: 45 total plays compared to Fayetteville’s 69; Rebels had 289 yards to Fayetteville’s 284; Rebels passing was 128 yards, Fayetteville 61; Rebels rushing 161 yards, Fayetteville 223; Rebels first downs 13, Fayetteville 15; Rebels turnovers 1, Fayetteville 0; Rebels penalties, Fayetteville 11.
QB Jackson Cassidy had 128 passing yards and was 9 of 15 completions. He had 61 rushing yards.
MHS Rushing — Taylor 11 carries for 89 yards and two touchdowns. Rashad McCreary had 1 carry for 7 yards; Etijay Tharpe had 1 carry for 4 yards.
MHS receiving included Zay Webber, 3 for 57 yards; Jake Cassidy 1 for 23 yards; McCreary had 1 for 22; Aird had 2 for 19 yards; Stafford Roditis had 1 for 4 yards; and Taylor had 1 for 3 yards.
MHS Tackles — Cassidy had 11 and 1 assist; McCreary had 4 and 2 assists; David Cheney had 3 and 4 assists; Camden Allison had 3 and 3 assists; Aird had 2; Drew Chappell had 2 and 3 assists; Daniel Latimer had 2 and 1 assist; Tharpe had 1; Jake Cassidy had 1; Tate Surber had 1 and 1 assist; Chase Norden had 1 assist; Landon Brown had 1 assist.
MHS kickoffs — Stafford Roditis had 2 and 5 punts; Zach Aird had 1 kickoff.
Tickets for the McKenzie-Memphis Academy of Science and Engineering (MASE) game are at gofan.co/app/events/803055.