McKENZIE — Senior Director of Athletics, Brad Chappell announced Friday at the Annual Jerry Wilcoxson Memorial Golf Tournament, Ricky Rosenjack is also being inducted into the Bethel Athletic Hall of Fame as a contributor. Rosenjack joins Alicia James and Leah Hensley Cripps in the class of 2022. 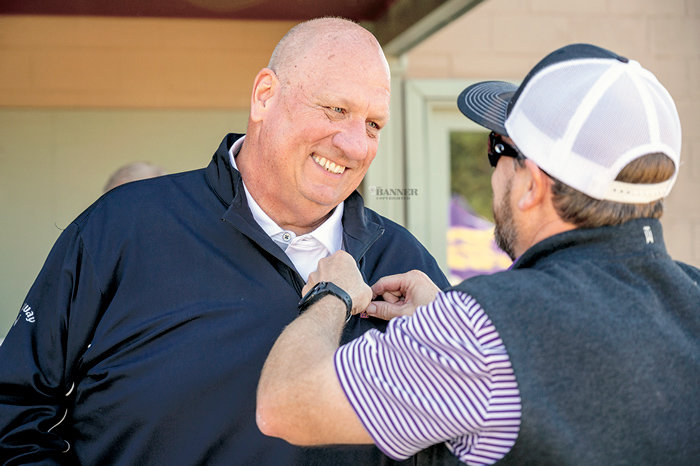 Ricky Rosenjack (pictured left) was inducted into the Bethel University Sports Hall of Fame. He is honored by Bethel Athletic Director Brad Chappell.
Posted Tuesday, October 25, 2022 5:00 pm
McKENZIE — Senior Director of Athletics, Brad Chappell announced Friday at the Annual Jerry Wilcoxson Memorial Golf Tournament, Ricky Rosenjack is also being inducted into the Bethel Athletic Hall of Fame as a contributor. Rosenjack joins Alicia James and Leah Hensley Cripps in the class of 2022.
McKenzie High School graduate, Rosenjack, attended Bethel University on a full, four-year golf scholarship and graduated in 1981 with a B.S. degree in Chemistry and Biology. After working for several years, he entered Vanderbilt University and completed an MBA at Owen Graduate School of Management. Ricky has also completed executive graduate studies at Harvard University and Wharton University.
During his time at Vanderbilt and after he made a connection with the CEO of Textron over a mutual love for the game of golf, Ricky began his thriving career in aerospace. This year, he completes 42 years of working in the aerospace industry. Over the years, Ricky has held senior leadership roles at Textron Aerostructures, Bell Helicopter, Heroux Devtek, Progressive, TECT Aerospace, and currently serves as President and CEO of NWI Industries.
Despite a phenomenally successful career, his true love lies in his strong Christian faith and love for his family. His mother, JoAnn Cooper of McKenzie, gave him a solid upbringing, instilling in him a strong work ethic and desire to help his fellow man. Ricky has a wife, Stephanie, two daughters, Mackenzie Rosenjack and Hillary Zimmick, a son-in-law, Caleb Zimmick, and one precious grandson, John Richard Zimmick. They are the lights of his life.
Rosenjack who was caught by surprise with the announcement said, “I am honored to receive this award and to have my wife and mother here makes it more special. I thought my wife having my mother here was her just being a special daughter-in-law. I have been blessed with so many wonderful things in my life, and I owe much of it to Bethel. My family, business career and golf are results of my Bethel experience. Dr. (Jerry) Wilcoxson signed me, and I enjoyed every moment here.” Rosenjack added, “My sincere thanks to Dr. Walter Butler, Brad Chappell, Coach Larry Joe Smith and all those who had a part in making this happen. I will always be grateful.”
All three were honored Saturday morning in the induction ceremony held in Crisp Arena.