ATWOOD — Cloudy skies, breezy winds, and a good crowd were on hand for the annual Centennial Bank Middle School All-Star Game between the North and South teams. 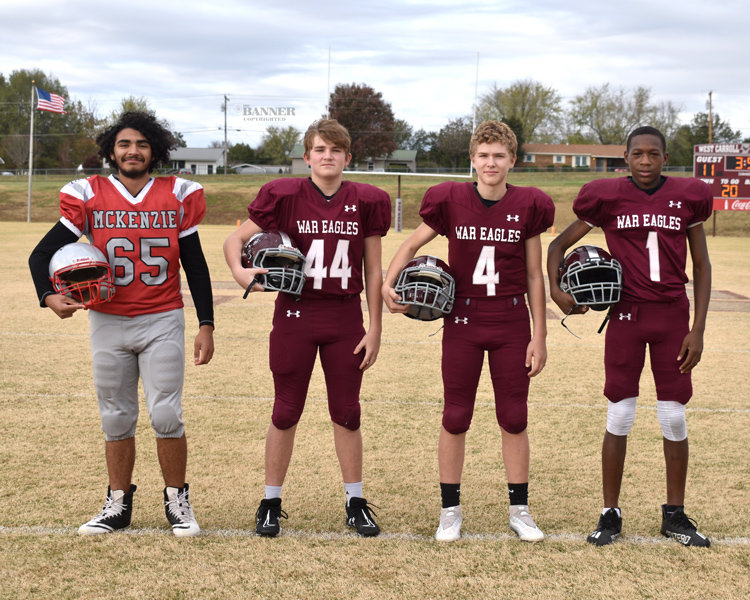 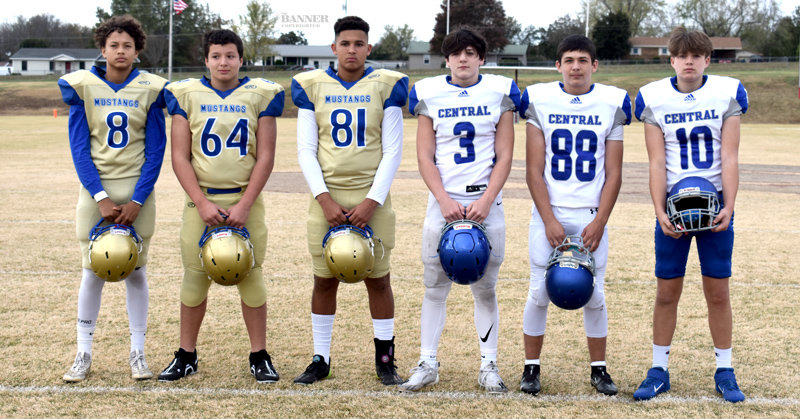 Huntingdon’s Kenton Smith, Brayden Davis, and Bryson Whiteside along with Central’s Tanner Walters, Parker Finley and Carter Lowe.
Previous Next
Posted Tuesday, November 8, 2022 12:50 pm
By Jim Potts
jpotts@mckenziebanner.com
ATWOOD — Cloudy skies, breezy winds, and a good crowd were on hand for the annual Centennial Bank Middle School All-Star Game between the North and South teams.
The North team included players from McKenzie, West Carroll, Dresden, Union City, Greenfield, Martin, Lake County, Milan, Peabody, and Gibson County. They were coached by the Milan Middle Staff.
The South team included players from Huntingdon, Hollow Rock-Bruceton, Camden, Lexington, Henderson County North and South, Decatur Co. Stewart Co. Paris Inman, and Waverly.
The South team won the toss electing to take the ball first. The North attempted an onside kick on the kickoff that gave the South possession at midfield. The South marched downfield mixing up runs capping the drive on a 27-yard touchdown by Lexington Middle’s Brady McEarl with 3:54 left in the opening quarter. The 2-point conversion run was good for an 8-0 lead for the South.
The two teams swapped possessions for the remainder of the first quarter and into the second when the North team fumbled on a first down play with the South recovering. Lexington’s McEarl found the endzone again on a 16-yard scoring run with 3:25 left until the half. The two-point conversion attempt was no good leaving the South with a 14-0 lead. The score remained 14-0 at halftime.
The play of the game came with 2:51 remaining in the third quarter when Camden’s Eli Kee stripped the ball and took it 95 yards for a touchdown for the South team. The two-point conversion was good for a 22-0 lead.
The two teams swapped possessions for the remainder of the third and into the fourth quarter when Huntingdon’s Bryson Whiteside scored on a 6-yard touchdown with 5:13 left in the game. They completed a two-point conversion making the score 30-0 in favor of the South which would be the final score.
Following the game, several players were honored with awards. Whiteside earned the Offensive MVP Award for his efforts in the game. Other local players involved in the game were Huntingdon’s Whiteside, Kenton Smith, and Brayden Davis; Central’s Deagen Collins, Tanner Walters, Parker Finley, and Carter Lowe; West Carroll’s Darion Taylor, Zac Fowler, and Jace Hammett, along with McKenzie’s Ramon Tellez.