History Relived Through Storytellers at The Dixie 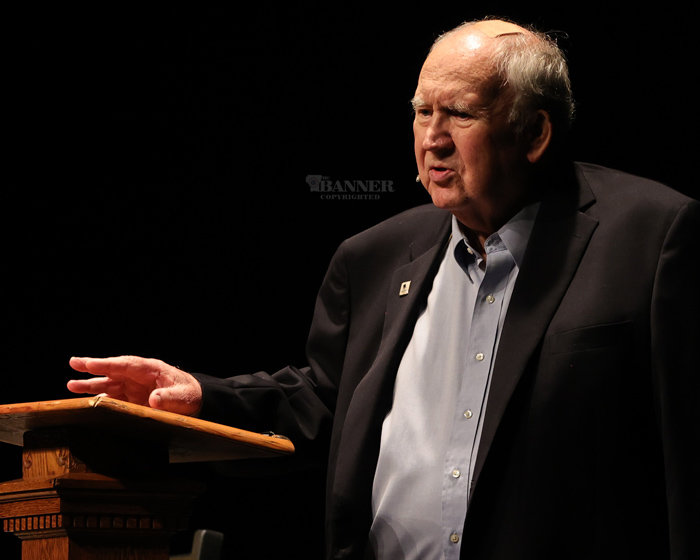 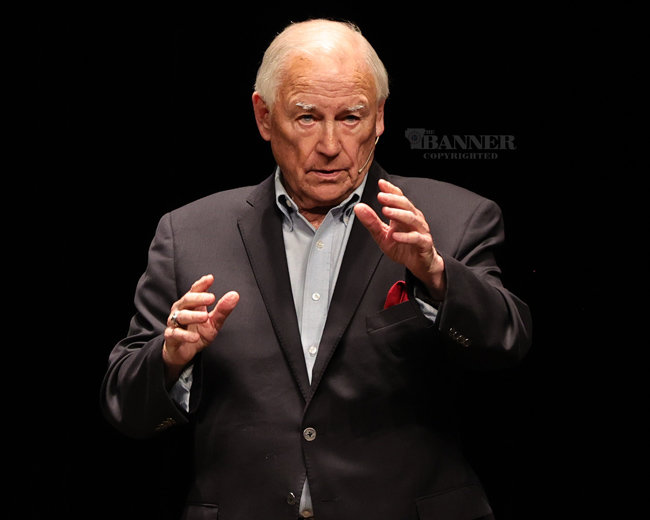 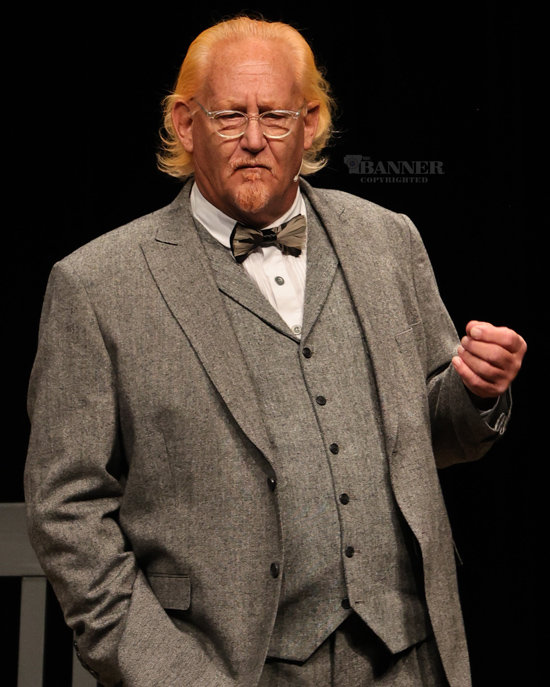 John Everett Williams portrayed Governor Alvin Hawkins.
Previous Next
Posted Tuesday, August 9, 2022 5:00 pm
By Joel Washburn
washburn@mckenziebanner.com
HUNTINGDON (August 6) — The stories of Governor Gordon Browning, Governor Alvin Hawkins, and aviator Lt. Jack Jenkins were portrayed by Robert “Gus” Radford, John Everett Williams, and Kent Jones on Saturday, August 6. The portrayals were part of the history of Huntingdon during its bicentennial celebration.
Some of the best attorneys, who can weave some of the best narratives were showcased to an appreciative audience in the Hal Holbrook Theater inside the Dixie Carter Performing Arts Center.
Radford, a former district attorney, portrayed Gordon Browning, who was born in Carroll County, educated in Milan, and practice law in Huntingdon, where he lived later in life. He served in World War I, and won a seat in Congress. He ran for governor and was defeated, and returned home, where he served as the local Chancellor. He re-enlisted and served in WWII. He again ran for governor while served in France. He lost his bid for election. He ran again in 1948 and won. He was a strong advocate for veterans, roads and teachers. He won re-election in 1950 and lost in 1952, when Frank Clement won. In 1954, he ran again and lost. He built a house in Huntingdon in 1953, which still stands today. Huntingdon Mustangs sponsored a football bowl game named in Browning’s honor. He rode around the playing field and returned to the hospital.
Kent Jones, an attorney who has practiced law in Carroll County his entire career, told the story of Lt. Jack Jenkins, an Air Force aviator, who piloted a military aircraft, Fairchild C-119 Flying Boxcar over Huntingdon on February 26, 1954.
The plane departed Ft. Benning Georgia and was scheduled to perform short-range training maneuvers.  Instead, Lt. Jenkins decided to buzz his hometown of Huntingdon. Jenkins buzzed downtown and Huntingdon High School at 300 feet and 165 miles per hour on a Friday afternoon, Jenkins turned the aircraft and again buzzed downtown at full throttle at close to 200 miles per hour.
The Carroll County Courthouse had court in session. The occupants of the courthouse ducked and took cover. Sheriff Roy Butler and Attorney Hance Lassister, who witnessed the incident.  He was at the Courthouse when Lt. Jenkins approached, realized he was too low and attempted to pull up. The aircraft was not designed for such extreme maneuvers and started falling apart. One wing ripped away, fuel spilled and ignited leaving a trail of fire, and the plane crashed in a field, where Wal-Mart now sits. On the ground were two men, Homer DeMoss and Freeman Taylor, who were treated for burns “requiring hospitalization. All the occupants of the plane died.  Lassiter represented the injured men in court and lost. He appealed the case to the Supreme Court. The government settled before it went to court. Jones became Lassiter’s stepson and law partner. Jones said it is the only case in Carroll County to be filed in the Supreme Court.
John Everett Williams, a judge on the Tennessee Court of Criminal Appeals, portrayed Governor Hawkins.  Hawkins was born in 1821 and was the 22th governor of Tennessee in 1881-83 and was praised for having one of the least corrupt administrations, even though he lost reelection. Hawkins was born in Bath County, Kentucky, the eldest of thirteen children of John Hawkins and Mary (Ralston) Hawkins. When he was four, his parents moved to Maury County, Tennessee, and two years later moved to Carroll County. Hawkins attended McLemoresville Academy and Bethel College. He briefly served as a consul to Cuba, however, Yellow Fever was pandemic and he returned to the states.
Hawkins was against slavery and thought it was wrong for one man to own another. A Civil War was fought over the issue of slavery. He was also against Tennessee seceding from the Union.
He died in his Huntingdon home in 1905. He and many of his family are buried in Hawkins Cemetery in Huntingdon.

Henry County Solar Farm-Puryear on Target for Completion in December