A sudden drop in temperatures, mixed with rains that turned to snow, coupled with sub-zero temperatures wreaked havoc person in the Eastern United States. 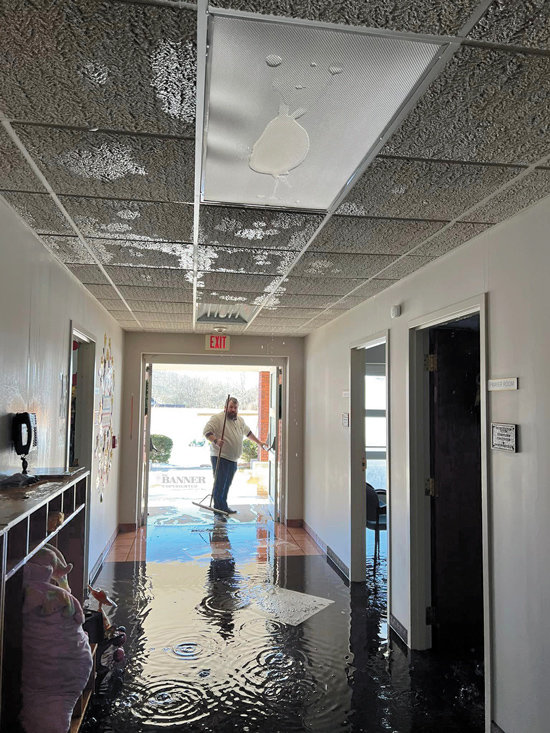 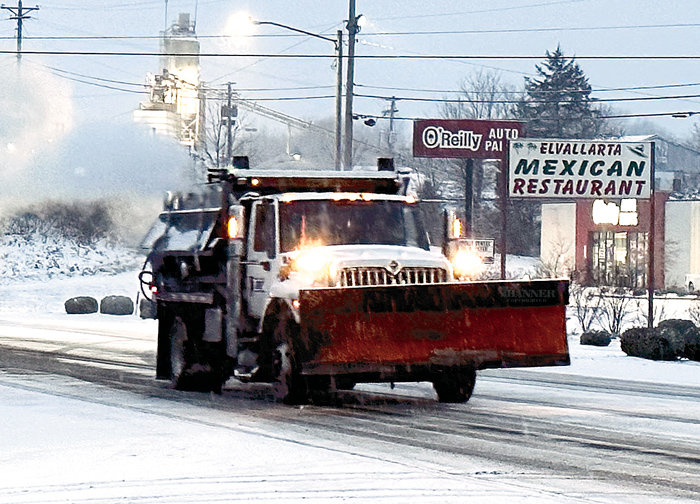 A Tennessee Department of Transportation truck, loaded with salt, leaves the headquarters in McKenzie. Monday was the state’s official Christmas holiday, however, many of the road crews worked through the weekend.
Previous Next
Posted Tuesday, December 27, 2022 5:00 pm
A sudden drop in temperatures, mixed with rains that turned to snow, coupled with sub-zero temperatures wreaked havoc person in the Eastern United States. Airports were operating with limited flights, stranding passengers in the airports, Tennessee Department of Transportation was busy treating, salting, and scraping highways, and people were preparing by trying to shield their homes against the unusually low temperatures.
Randy Long of Atwood reported a temperature of -2 degrees, west wind 13 mph. -20 degrees wind chill at Long Farms in Atwood, Tennessee on December 23, 2022.
Donald Tolbert, a local plumber posted on social media that he was overwhelmed with calls to make repairs and thaw pipes. He expected to continue making repairs through the week of December 26.
Dusty Graves of Graves Plumbing indicated he is over 300 calls behind.
JJ’s Diner in downtown McKenzie opened as a warming shelter. The staff remained overnight Thursday.
Janet Albritton, owner, and Ashley Snead remained at the restaurant, served some customers around 9 p.m. and the Carroll County Electric employees around midnight. Even with the frigid conditions, JJ’s was busy Friday.
“It was the right thing to do,” said Janet. She said she told the police to alert others she was open.
McKenzie City Hall and the Carroll County Emergency Operations Center also served as warming centers. Both have standby generators.
Tennessee Valley Authority asked all of its local power distributors to initial rolling blackouts through a procedure known as Step 50. That occurred on both Friday and Saturday, December 23 and 24.
Area, rural distributors participated in the rolling blackouts. In Nashville, more than 100,000 were without electrical power - partly because of rolling blackouts and equipment failures.
Ryan Drewry, general manager of Carroll County Electric issued the following statement on Christmas Eve following the cessation of the rolling blackouts.
“Carroll County Electric Department appreciates customer patience and understanding as Step 50 – Rolling Blackouts were implemented. These were mandated by TVA to all 153 local power companies to prevent widespread system outages. CCED staff executed controlled rolling blackouts, with precision, with the majority extending to 20 minutes or less to minimize impact and achieve the mandated request. There were two exceptions in which the outage extended for an hour.
“A substation breaker would not close due to load. Load had to be further separated for the breaker to close restoring power. This outage extended for approximately 1 hour impacting customers along Hwy 22 from the Carroll County Airport to the bypass north of Huntingdon. It also included areas from the Hwy 22 bypass west of Huntingdon along Hwy 70A to just east of McLemoresville.
“A line recloser had difficulties closing back. Additional steps were required to safely restore power. A breaker at our Bruceton Substation had to be dipped to safely close an airbreak switch restoring power on Hwy 114 north of Hollow Rock.
“An event, unrelated to the rolling blackouts, occurred around 9:30 a.m. on Connie Allen Rd outside McKenzie. A vehicle accident involving a pole impacted power to 13 customers.
“We sincerely apologize for the inconvenience. Included is a TVA media advisory for reference,” concluded Drewry.
TVA supplied more power in 24 hours than any time in its history.
TVA released the following statement.
“Record-setting temperatures across the region continue to put intense pressure on the power system. The Tennessee Valley Authority and local power companies working around the clock in difficult conditions to meet this extreme demand.
“On Saturday morning, December 24, TVA directed local power companies to implement planned, short duration, intermittent power interruptions to maintain system reliably. This action is similar to steps that TVA and local power companies took on Friday, December 23, to help ensure power system reliability. This measure is expected to be temporary until the highest peak power demands have been met.
During the 24 hours of December 23, TVA supplied more energy than at any other time in its history – 740 gigawatt-hours, or 740 million kilowatt-hours. The cold also produced a winter record for peak power demand of 33,425 megawatts at 7 p.m. CST when the region-wide average temperature was 9 degrees.
“The strong partnership between TVA, local power companies and industrial customers, as well as the individual contributions of residents to conserve energy, continues to make a difference.”
The Tennessee Emergency Management Agency (TEMA) released the following statement on Thursday.
The State Emergency Operations Center is activated, and State of Tennessee personnel are supporting response efforts and resource requests.
The State Emergency Operations Center in Nashville was activated at a Level 3 – State of Emergency with Emergency Service Coordinators from many State of Tennessee departments supporting the ongoing situation. Tennessee Emergency Management Agency (TEMA) staff will assist local officials with any needs or resource requests,
Extremely cold temperatures across the region created unprecedented demands on the power system. Businesses and the public have been asked to reduce electric power use as much as possible without sacrificing safety. TVA and local power companies proactively addressed strain on the grid by temporarily reducing power supplies to certain local areas, which resulted in brief power outages to homes and businesses on a rolling basis.
Temperatures are not expected to reach above freezing until Monday afternoon, December 26.