McKENZIE (August 25-27) — A clear, blue sky was overhead with a slight breeze blowing through the tents set up in the downtown square; it was a great weekend to visit the Sweet Tea and Southern Pickin’s Festival in Downtown McKenzie. 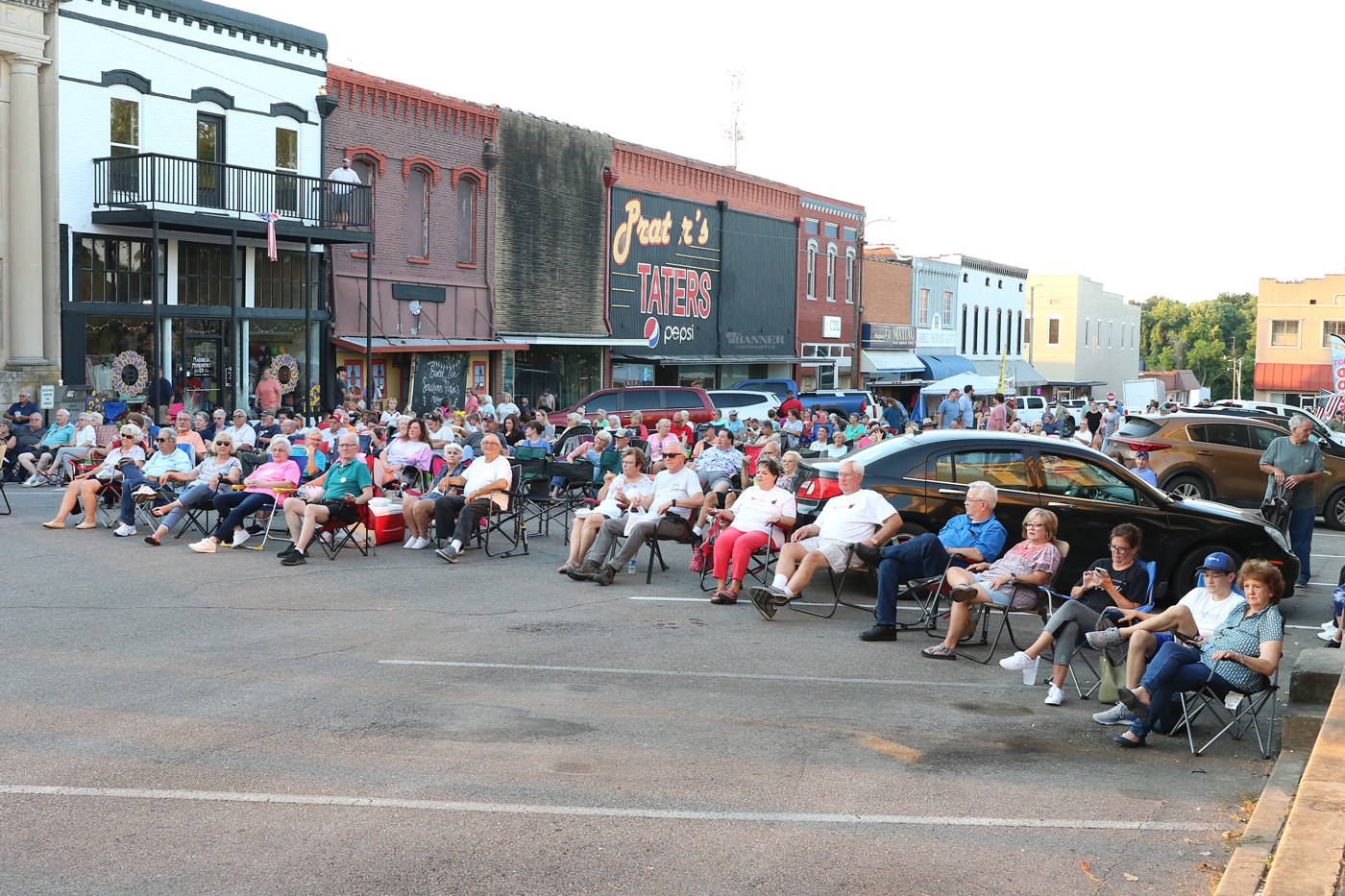 An appreciative audience sat along Broadway to enjoy entertainment on the main stage at the Sweet Tea Festival.
Photo by Joel Washburn/The Banner 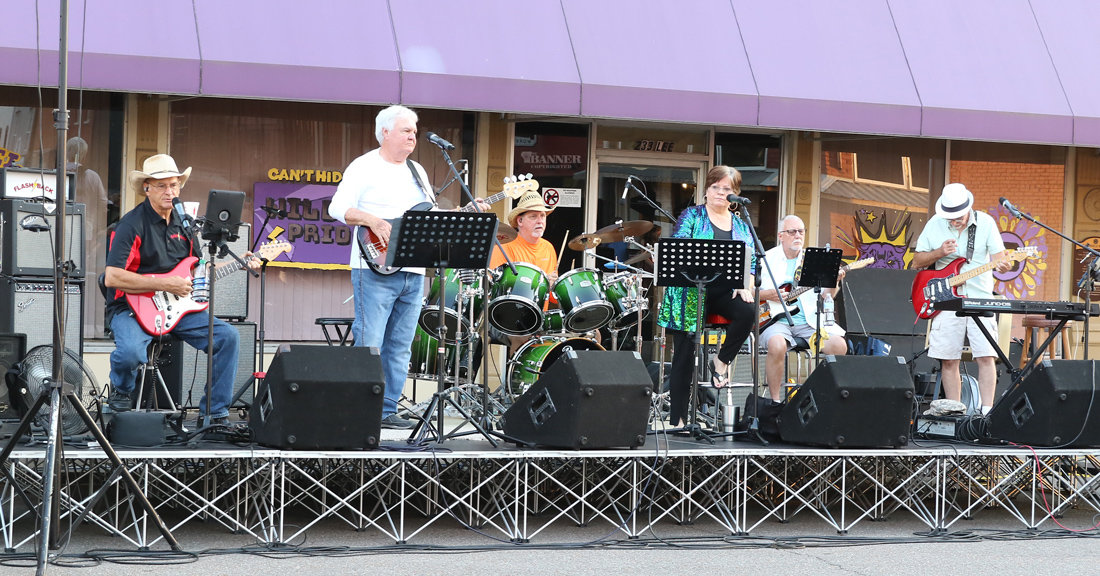 The Flashback Band from McKenzie was on the main stage on Saturday evening at the Sweet Tea Festival 2022.
Photo by Joel Washburn/The Banner 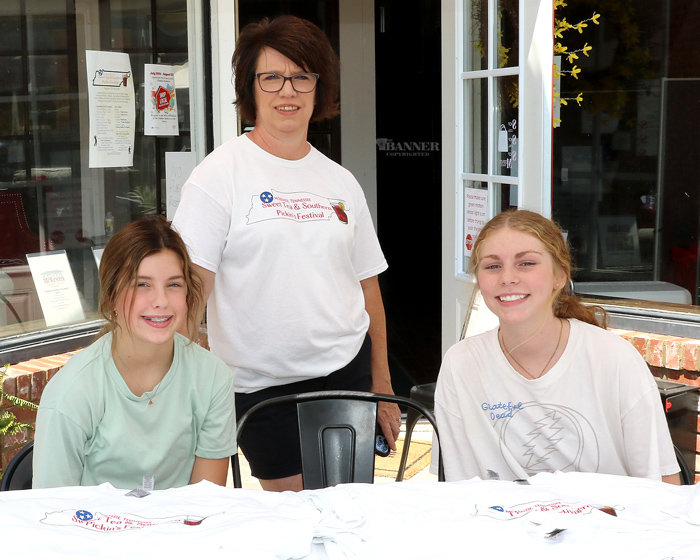 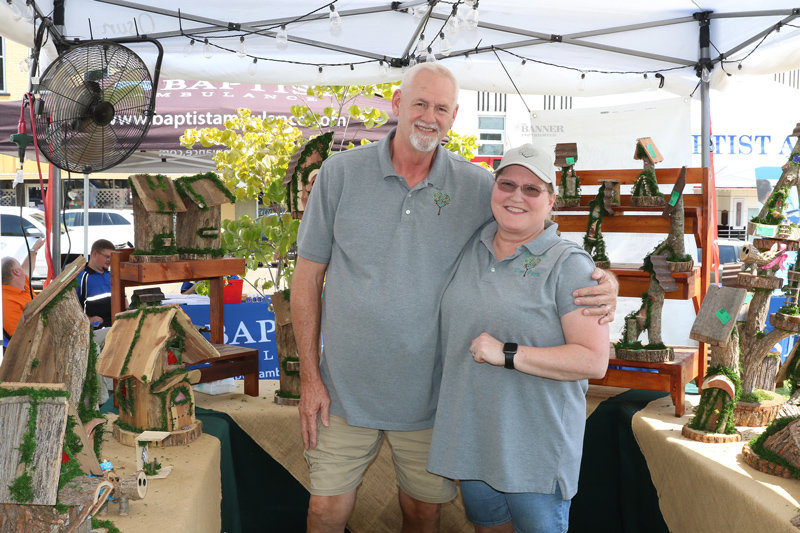 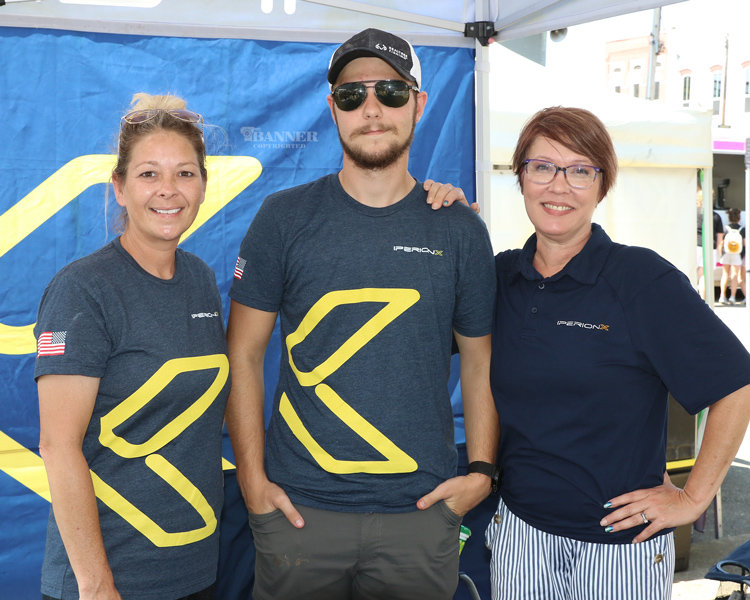 Iperion X, a Camden-based company, plans to mine rare earth materials in the Benton, Carroll, and Henry county-area. One of the main metals is titanium. Pictured are Stephanie Harcleroad, Ryan Harcleroad, and Michele Smith.
Photo by Joel Washburn/The Banner 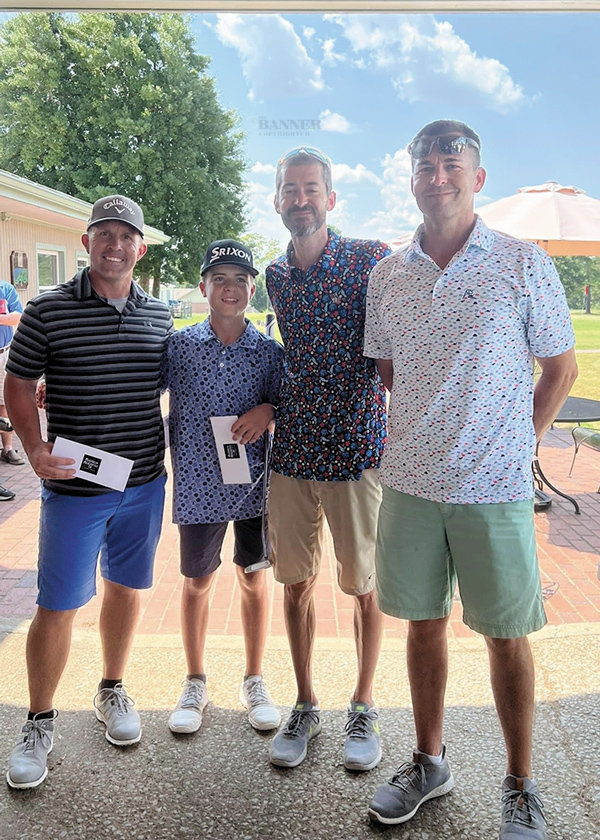 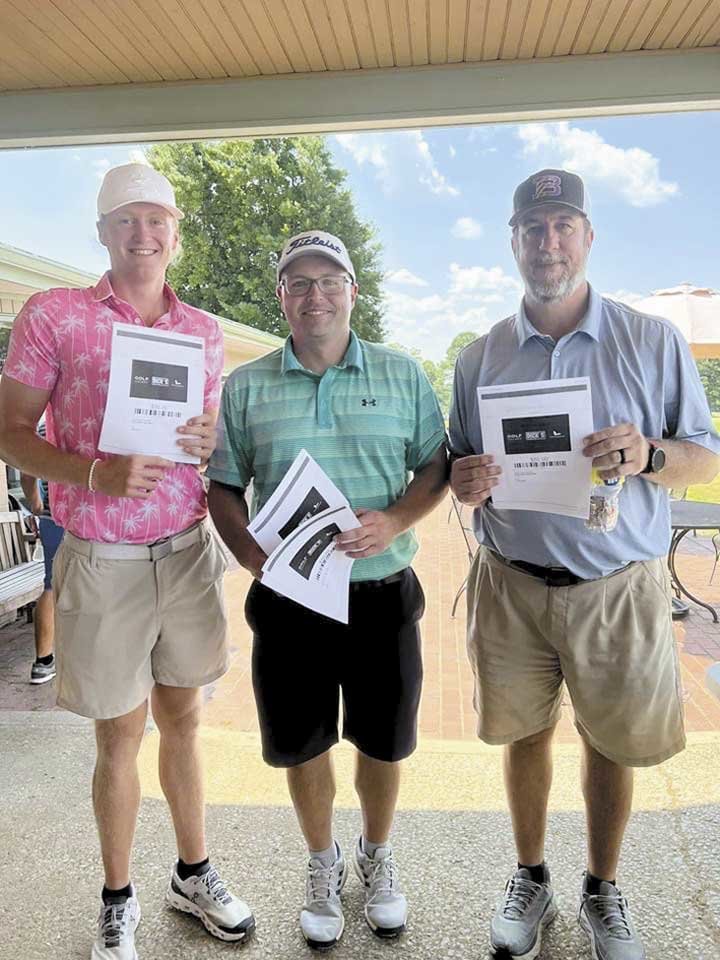 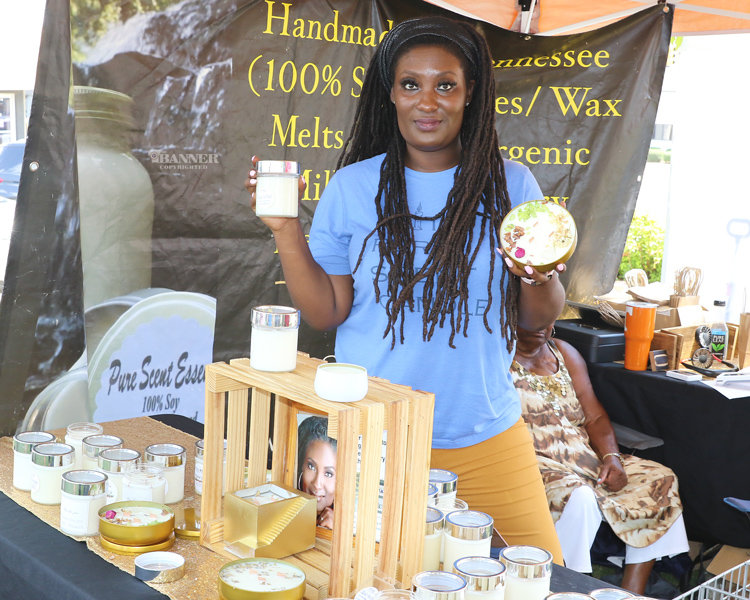 Homemade candles by Pure Scent of Jackson and soon Nashville. Ms. Mebane is a Wingo Community native, who started the business using only eco-friendly ingredients.
Photo by Joel Washburn/The Banner 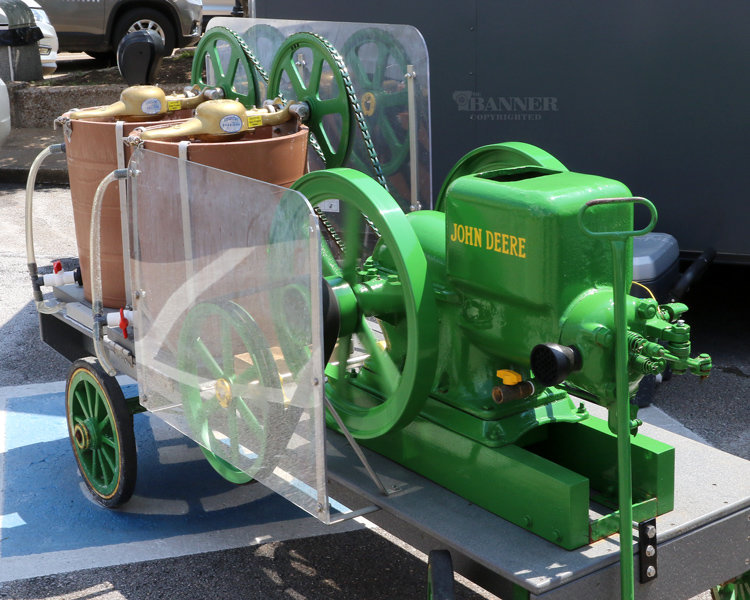 Olen Borntrager of Huntingdon and family made homemade ice cream using the power of a 1943 John Deere hit and miss gasoline engine. He made about 25 gallons The Amish family requested not to be photographed.
Photo by Joel Washburn/The Banner
Previous Next
Posted Tuesday, August 30, 2022 5:00 pm
McKENZIE (August 25-27) — A clear, blue sky was overhead with a slight breeze blowing through the tents set up in the downtown square; it was a great weekend to visit the Sweet Tea and Southern Pickin’s Festival in Downtown McKenzie. The festival offered live music, sweet tea, a golf and disc golf tournament, a variety show of local talent, and lots of games and food.
The Southern Fried Funnies, presented by Carroll Arts, kicked off the festival weekend on Thursday, August 25 with a variety show of sketch and improv comedy.
Friday’s festivities began with an inaugural golf scramble at the Carroll Lake Golf Club at 9 a.m. The tournament’s proceeds benefited the McKenzie Chamber of Commerce. Activities included five Closest to the Hole and first through third place prizes. A total of 16 teams competed in the scramble. Pepsi-MidAmerica provided drinks and Big Daddy’s BBQ provided lunch.
Saturday morning, the Farmer’s Market hosted a Fruit & Vegetable Derby Day. The market was a buzz with patrons. Camp Costello Honey fascinated visitors with an enclosed bee box that showed the bees working in a hive making honey. Susie’s petting zoo was located near the Farmer’s Market.
The petting zoo attracted lots of young children who got to pet baby pigs, chickens, a donkey, a Brahma bull and baby kangaroo.
The “Sweet Tea Classic” Disc Golf Tournament, sanctioned with the Professional Disc Golf Association (PDGA), was Saturday, August 27. Will McKaskle of Dynamic Disc in Nashville ran the tournament’s live digital scoring.
With nearly forty vendors, Chamber of Commerce director Monica Heath said the Sweet Tea and Southern Pickin’s Festival had a “good variety [of vendors] this year.”
Festival vendors included American Honey Boutique, W.H. Wax, The Craftist, Twyla Designs, the Red Roof Bakery and Mia Bella Candles, Paradise Silk Soaps, Two Days Tree Farm, LuLu’s Pretty Things, IperionX, A-Door-Able Doors and More, Dorsett Farmhouse, TNT Custom Designs, Maple & Monroe, A Place for Us, PJ’s Family Crafts, Pats Snap Jewelry, WeatherBeard Supply Company, Paracord Stuff & Gifts, Sweet Tea & Polka Dot Designs, ThreeHearts Handbags, Mama Yo’s Peanut and Pecan Brittle, 360 Photo Booth Fun, Dry Hollow Farm, Hillbillies Delight, Alma’s Corner and more.
Festival goers also enjoyed sweet tea made by Mayor Jill Holland and other concession booths like the Kettle Corn Poppers, the Ball Lady, the Milkshakery, Eddyvilles Weiner Wagon, and Showstopper Concessions. Keesha Johnson sold sweet tea, lemonade, hoagie sandwiches and fries.
McKenzie’s downtown businesses, including McKenzie Station, Magnolia Mercantile, Prater’s Taters and Urban Trading Company were also open during the festival.
A Kids’ Fun Zone was set up near the Splash Pad, with bouncy houses and water slides.
Friday night’s musical entertainment was led by the Fajita Bros from 6-8 p.m., followed by the King Beez from 8-10 p.m. Saturday’s music began at the gazebo at 2 p.m. with Colton Baker & Band. At 6 p.m., Flashback took the stage, and Paula Bridges followed at 8 p.m.
The Sweet Tea and Southern Pickin’s Festival is from 5 p.m. until 10 p.m. Friday, August 26. Saturday, the festival begins at 9 a.m. and ends at 10 p.m. The festival is in downtown McKenzie. Admission is free.
If any local businesses or individuals wish to be involved in the festival next year, please contact Monica Heath or the City of McKenzie at 731-352-2292.