Two Extricated From Vehicle After Fleeing From Police

McKENZIE (January 13) — Friday the 13th proved to be unlucky for two men after they fled from authorities, exited the roadway and struck a tree. Both men had to be extricated from the pickup truck and the driver was airlifted to a medical facility.

Two Extricated From Vehicle After Fleeing From Police 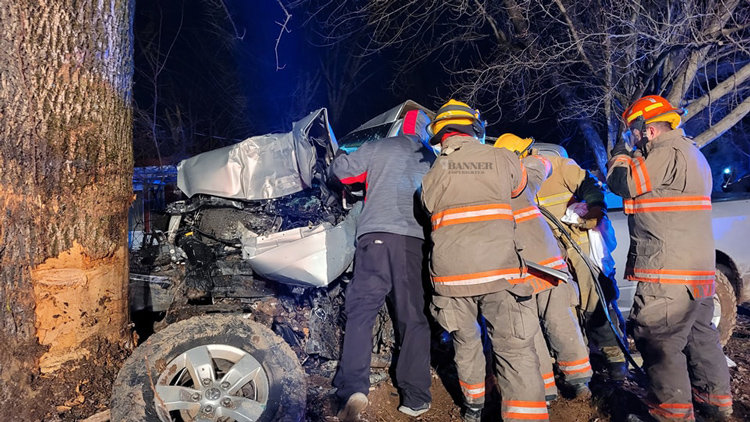 McKenzie Fire/Rescue Extricate two passengers from a wrecked vehicle on Friday evening.
Photo courtesy of McKenzie Fire Department
Posted Tuesday, January 17, 2023 5:00 pm
McKENZIE (January 13) — Friday the 13th proved to be unlucky for two men after they fled from authorities, exited the roadway and struck a tree. Both men had to be extricated from the pickup truck and the driver was airlifted to a medical facility.
McKenzie Police Department’s Officer Sean Beck indicated he was patrolling when he clocked a Dodge Ram pickup truck speed on Oaklawn Drive. The officer turned around to follow and activated his blue lights as the pickup truck turned onto SR 124W and drove into Weakley County.
Dylan Bates, 20, Highway 436, McKenzie was driving the pickup truck, according to the report.
Officer Beck indicated he witnessed the pickup truck driving at speeds of approximately 80-85 miles per hour, passing vehicles on a double solid line. Since it was outside the city limits, Beck slowed the patrol vehicle and turned off the emergency equipment. Beck said he made a curve on State Route 124 and witnessed the vehicle off the roadway and had crashed into a tree. The driver was yelling in pain. Officer Beck advised the dispatcher to send rescue and emergency medical services.
McKenzie Fire/Rescue used extrication tools to remove the doors to free the patients. The driver, Bates, was airlifted and the passenger, Stephen Stigall, was driven to the hospital to treat his injuries.
Bates is charged with Evading Arrest, Reckless Endangerment and Simple Possession/Casual Exchange.