Unemployment is Lowest in 12 Years or More

NASHVILLE — Carroll County just recorded its lowest unemployment in 12 years, possibly longer, according to statistics released by the State of Tennessee and the Carroll County Chamber of Commerce.

Unemployment is Lowest in 12 Years or More 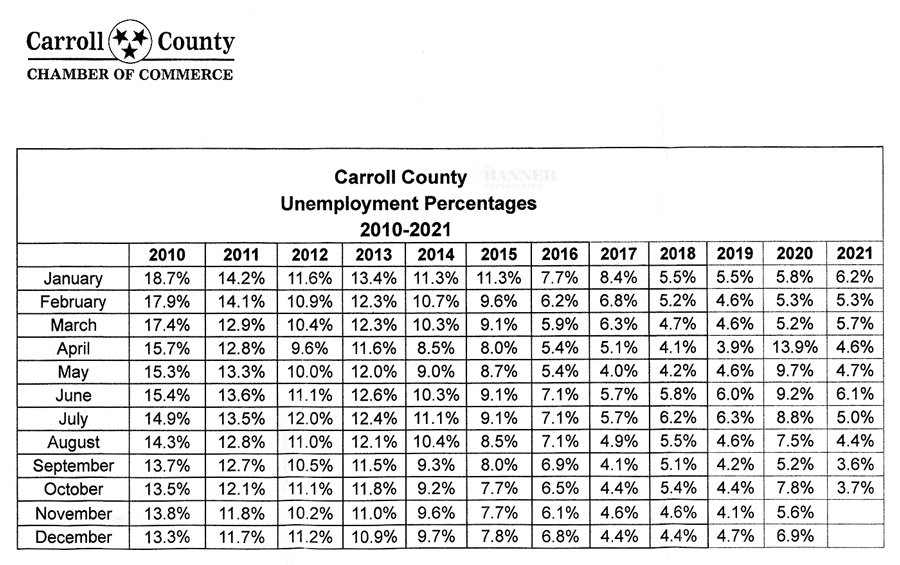 NASHVILLE — Carroll County just recorded its lowest unemployment in 12 years, possibly longer, according to statistics released by the State of Tennessee and the Carroll County Chamber of Commerce.

The Tennessee Department of Labor and Workforce Development indicated an unemployment rate of 3.2 percent in November 2021, the latest month in which statistics are available.

According to the Chamber of Commerce’s statistics, the county’s unemployment rate was 6.2 percent in January 2021 varied throughout the year and recorded a rate of 3.2 percent in November. In the year, 2020, the rate climbed to a high of13.9 percent in April at the height of the COVID-19 pandemic.

The county gained great success in the last three years with new industries and expansion of the labor force in other industries. Dynamix, VP Racing Fuels and Hydrogear located in Huntingdon and Pottery Direct and VP Racing Fuels located in McKenzie. Granges, Profile, Inc., and Haven Steel (formerly CSI) and Allegion (Republic Steel) all announced an increase in labor force.

When VP Racing Fuels recently announced its expansion in McKenzie and Huntingdon, the owner, Alan Cerwick praised the county for its cooperative effort to recruit and nurture industry.

The VP project in total will create 150 new jobs and comes less than three years after the company invested more than $4 million to establish its Huntingdon operations.

The expansion at VP Racing Fuels’ Huntingdon facility will comprise the company’s investment in a $7 million tank farm. At the new McKenzie location, VP Racing Fuels will expand operations to include blow mold machinery for bottling its products.

Looking back, unemployment was 18.7 percent in January 2010, the highest rate in the past 12 years.

Area Counties
In Henry County, the figures are similar with 446 unemployed out of a work force of 13,202 for a 3.4 percent unemployment rate which is also down from 3.7 percent in October and way down from 5.6 percent in November 2020 for a decrease of 2.2 percent.

Weakley County’s figures show 456 unemployed out of a total workforce of 15,677 for a 2.9 percent unemployment rate in November down from 3.2 percent in October. The rate was down considerably from November 2020 when it stood at 4.7 percent.

Benton County shows figures of 240 unemployed out of a workforce of 6,558 for a 3.7 percent rate which is lower than October’s rate which showed 4.1 percent unemployed and 5.9 percent in November 2020.

Statewide, the figures show 133,507 unemployed out of a workforce of slightly over 3.3 million workers for an unemployment rate of 4 percent. That is down slightly from a 4.2 percent rate in October 2021 and a larger rate of 5.6 percent in November 2020.

This past Friday, the United States reported 3.9 percent unemployment, a drop of 2.8 percent in the whole year of 2021, the best annual improvement on record. In the U.S., the average hourly wage increase was 4.9 percent in 2021.