GLEASON — West Carroll had a successful first road trip traveling to Gleason picking up a 33-24 win to improve to 2-0. 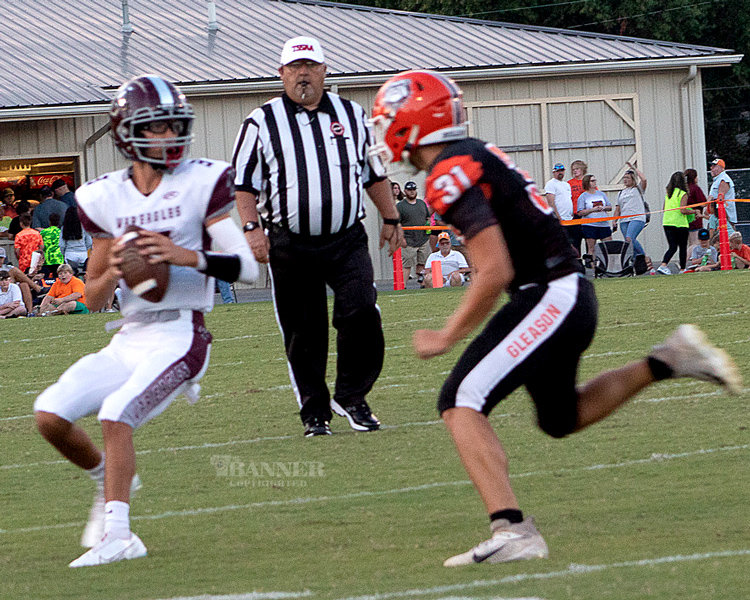 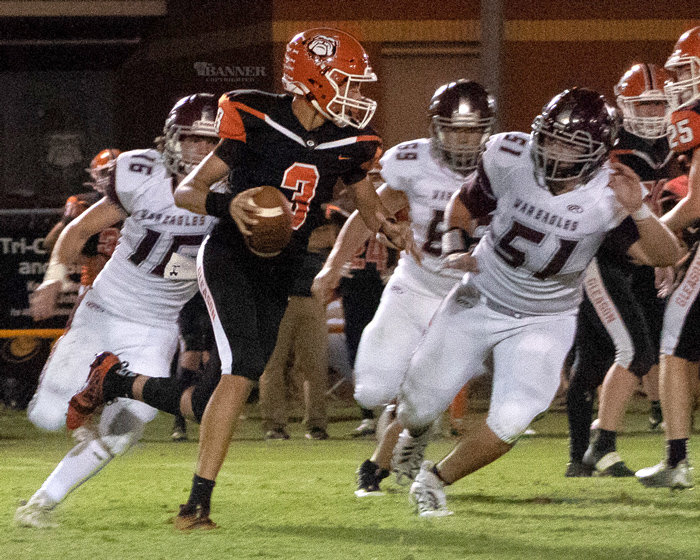 Gleason’s Kyzer Crochet (3) being chased by War Eagle defenders.
Photo by Jessa Potts
Previous Next
Posted Tuesday, August 30, 2022 8:00 am
By Jim Potts
jpotts@mckenziebanner.com
GLEASON — West Carroll had a successful first road trip traveling to Gleason picking up a 33-24 win to improve to 2-0.
Gleason won the coin toss and deferred to the second half. The War Eagles took the opening drive and didn’t travel far having to punt on fourth down. Gleason did move the ball some but was put in a fourth down situation during which War Eagle Nick Andre (51) dropped Gleason quarterback Kyzer Crochet for a sack and the ball went to West Carroll on downs.
The War Eagles drove from their 35 yard line to the Bulldog 18 where Jaxon Mims connected with JD Pigue for an 18-yard touchdown pass. They went for a 2-point conversion attempt which failed leaving West Carroll with a 6-0 lead with 2:17 left in the first quarter.
The Bulldogs took the kickoff and drove near midfield when the first quarter clock ran out. As the second quarter opened, they were facing a fourth down and four and chose to go for it and West Carroll’s defense stopped them short. The War Eagle offense drove to the Gleason 22 with assistance from a 45-yard Jaxon Mims run. Two plays later Drake Lehmkuhl picked off a War Eagle pass.
After Gleason failed to convert a first down, they punted and War Eagle Jay Long returned the punt to the Gleason 14. Three plays later, Long scored from three yards out with a 2-point conversion run good as West Carroll led 14-0. Gleason wasted no time answering the score with a 85-yard kickoff return by Kursin Gustafson. The Bulldogs were successful on a 2-point conversion run making it a 14-8 contest still in favor of the War Eagles. 14-8 turned out to be the halftime score of the game.
Gleason took the second half return to their own 35 and kept the ball for several plays before having to punt back to the War Eagles. West Carroll took over at their own 32 launching a scoring drive capped off by a 31-yard touchdown pass from Jaxon Mims to JD Pigue. The extra point was good for a 21-8 War Eagle lead with 5:20 left in the third quarter.
The two teams swapped possessions with West Carroll getting the ball back and doing a short drive capped by a Ben Pruitt touchdown run. They attempted a 2-point conversion pass which fell incomplete leaving the War Eagles with a 27-8 lead with 11 seconds left in the third quarter.
Gleason came out hot in the fourth quarter with two back-to-back touchdown drives. The first one came on a pass from Kyzer Crochet to Garrett Pinkston for a 13-yard touchdown. The 2-point conversion run was successful helping the Bulldogs close the lead to 27-16 with 8:31 left in the final quarter. The Bulldogs attempted and recovered an onside kick but West Carroll intercepted a Bulldog pass to end that possession.
West Carroll took over the ball at their own 48 and failed to move the ball much ending up in a fourth down situation and didn’t make the first down. Gleason took the ball deep on a 35-yard pass that set up a touchdown. Kyzer Crochet connected with Kursin Gustafson for an 11-yard touchdown pass with the two point conversion good closing the Bulldog deficit to 27-24 with 3:42 left in the game.
The War Eagles recovered a Gleason onside kick in good field position and scored the winning touchdown on a 42-yard run by Jayden Milton with the extra point attempt no good but giving West Carroll a 33-24 lead. Gleason connected on a 45-yard pass on the first play of their ensuing possession but stalled out throwing incomplete passes on third and fourth down. West Carroll took over possession and ran the clock out on their victory.
West Carroll improves to 2-0 with a home game against Humboldt this week. Gleason falls to 1-1 on the season with a trip to Bruceton this week.