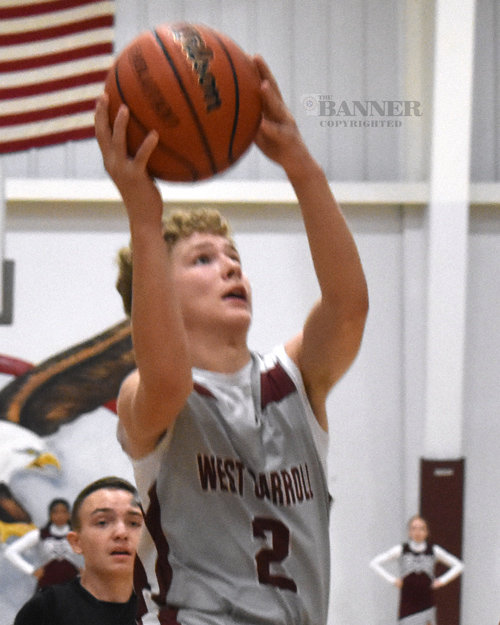 Zac Fowler (2) heads for a layup against Greenfield.
Photo by Jim Potts/The Banner 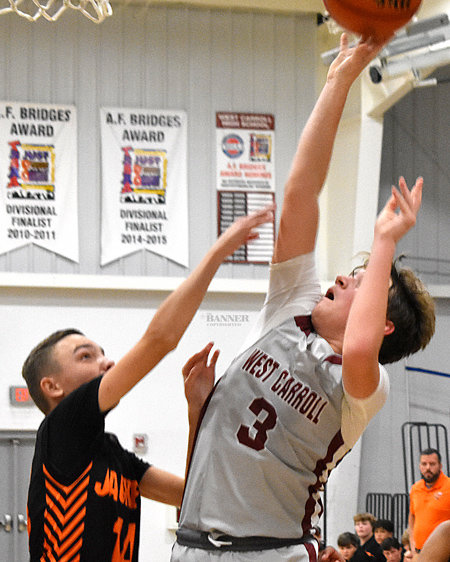 Jace Hammett (3) tips in a shot.
Photo by Jim Potts/The Banner
Previous Next
Posted Tuesday, November 8, 2022 12:45 pm
By Jim Potts
jpotts@mckenziebanner.com
ATWOOD — West Carroll Junior High Basketball played host to Greenfield Middle School, Thursday, November 3 losing both contests to the Lady ‘Jackets and Yellow Jackets.
In the girls’ game, Greenfield rolled to a 16-3 first period lead over the Lady War Eagles. Both teams went cold in the second period with the Lady Yellowjackets outscoring West Carroll 6-3 during the period and held a 22-6 halftime lead.
Greenfield heated up after halftime with a 17-point third period while holding the Lady War Eagles to just seven points. The Lady ‘Jackets led 39-13 heading into the final period. Both teams cleared their benches getting younger players some time on the floor with Greenfield securing the 41-23 win.
Gracelyn Vernon and Taylor Robinson led West Carroll with six points each followed closely by Grace Coleman and Aubrey Hammett with five points each. Chloe Rimmer chipped in a point for the Lady War Eagles.
Greenfield was led by Rayanna Fisher with 18 points. Kylie McNell and Ella Porter had seven points and six points respectively. Campbell McCellatell had four points while Maddie Bischall had three points. Caroline Warren and Maleigh Culver chipped in two points and one point each.
In boys action, West Carroll came out hot rolling to an 11-2 lead by the end of the first period. Greenfield whittled away at that lead cutting it to two by halftime with the War Eagles leading 19-17 at halftime.
The Yellowjackets doubled the War Eagles in the third period 14-7 to take over the lead 31-26 heading into the final period. West Carroll only managed six points in the fourth period while Greenfield pulled away with a 15-point effort to defeat the War Eagles 46-32.
Jace Hammett led West Carroll with 17 points followed by Darion Taylor with 9 points. Zac Fowler and Mason Taylor chipped in four points and two points respectively.
Greenfield posted two in double figures led by C. Porter with 16 points and A. Green with 14 points. K. Liggett added seven points while N. Brown and P. Scates put up five points each for the Yellowjackets.