ATWOOD (November 14) — West Carroll Junior High School held their homecoming hosting Bradford winning both games handily. (See related homecoming story). In the girls game, the Lady War Eagles rolled to a 16-2 lead in the first period and extended it to 26-11 by halftime. 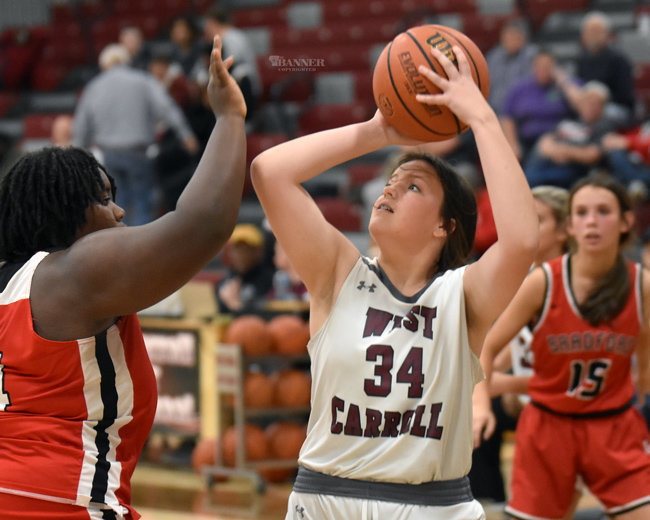 Taylor Robinson takes a shot over a defender.
Photo by Jim Potts/The Banner 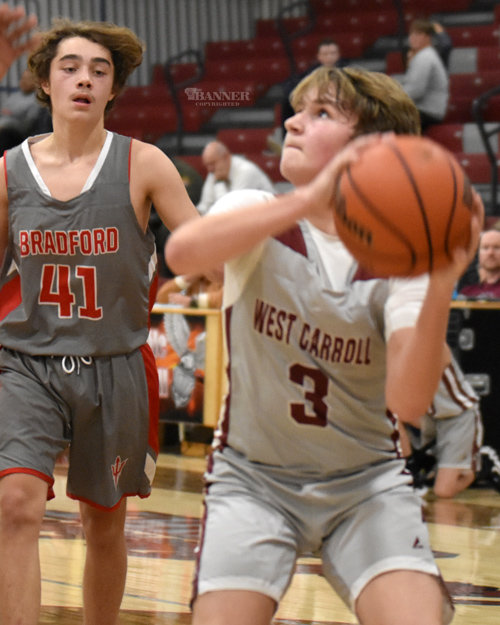 Jace Hammett gets ready to shoot for the War Eagles.
Photo by Jim Potts/The Banner
Previous Next
Posted Tuesday, November 22, 2022 3:40 pm
By Jim Potts
jpotts@mckenziebanner.com
ATWOOD (November 14) — West Carroll Junior High School held their homecoming hosting Bradford winning both games handily. (See related homecoming story). In the girls game, the Lady War Eagles rolled to a 16-2 lead in the first period and extended it to 26-11 by halftime.
In the third period, West Carroll began playing younger players and reached a 37-16 lead. Both teams cleared their benches in the fourth period with the Lady War Eagles scoring five points while holding the Lady Red Devils to no points in the period. West Carroll won the contest 42-16.
The Lady War Eagles were led by Grace Coleman with 14 points followed closely by Airyanna Metcalf and Taylor Robinson with nine points and eight points respectively. Aubrey Hammett added six points while Gracelynn Vernon and Chloe Rimmer had two points each. Marissa Mueller chipped in a point for West Carroll.
Bradford was led by Princess Cain with six points along with Brook Armstrong with four points. Laci Vinyard and Rylee Jorgenson had two points each while Mya Page and Avery Hardin chipped in a point each.
The War Eagle boys started fast with an 11-0 lead before Bradford scored in the first period. West Carroll held an 18-7 lead after one period. Both teams heated up in the second period with West Carroll outscoring the Red Devils 15-11 for a 33-18 halftime lead.
Younger players started getting action in the third period with West Carroll maintaining their lead 39-23 headed into the final period. The War Eagle substitutes put up nine points in the fourth period while Bradford scored a pair of baskets with West Carroll winning 48-27.
Jace Hammett had a huge game leading all scorers with 27 points for West Carroll followed by Darion Taylor with 14 points. Zac Fowler and Jack Fowler scored four points and three points respectively for the War Eagles.
The Red Devils were led by Trevor Harringron with 11 points and Brayden McDaniel with eight points for Bradford. Quacay Lewis added five points while Guner Skerritt and Alex Massey chipped in two points and a point respectively.