The Story of Carroll County Part 3

I find it interesting how many institutions, colleges and preparatory schools have called Carroll County home over its 200 years of existence. Currently, Bethel College/University is the only four-year accredited institution of higher learning in Carroll County, not to take anything away from McKenzie’s branch of the Tennessee College of Applied Technology.

The Story of Carroll County Part 3 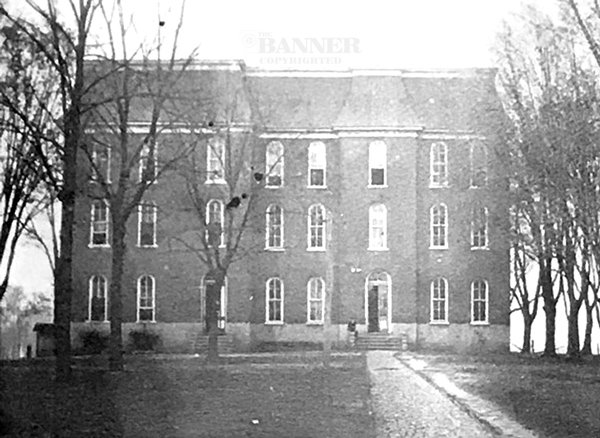 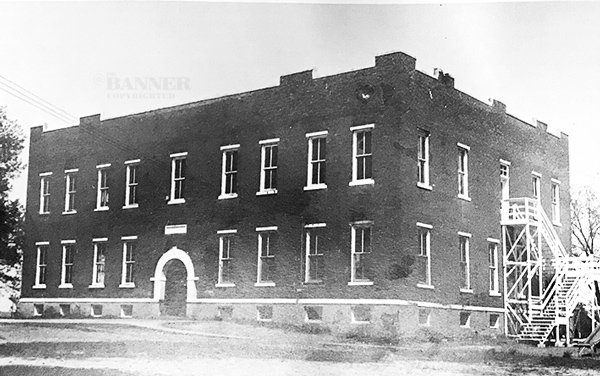 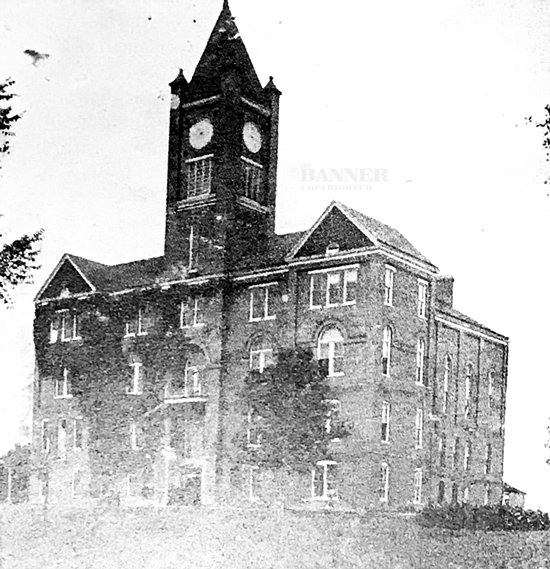 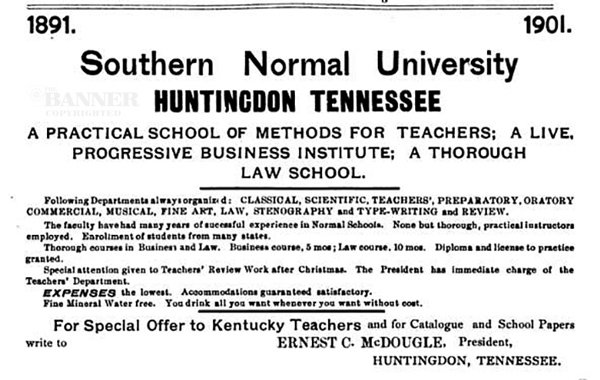 A newspaper advertisement for the Southern Normal School in Huntingdon, 1901.
Previous Next
Posted Tuesday, November 16, 2021 8:00 am
By Jason Martin
jmartin@mckenziebanner.com

I find it interesting how many institutions, colleges and preparatory schools have called Carroll County home over its 200 years of existence. Currently, Bethel College/University is the only four-year accredited institution of higher learning in Carroll County, not to take anything away from McKenzie’s branch of the Tennessee College of Applied Technology.

Over the years, there have been numerous local and private schools including McTyeire College which wasn’t a college but rather a preparatory feeder school. McKenzie was home to all important Webb School during segregation and the “separate but equal” period of our history.

McLemoresville couldn’t be outdone with Bethel College jumping ship in 1872. When Lewis S. Mitchell came to town in 1885, he began organizing the McLemoresville Collegiate Institute. In the fall of the following year, the school was opened on the second floor of the Cumberland Presbyterian Church.

The property that housed Bethel College was purchased and became the home of the new institution. The school was noted for having a “reputation of being one of the best schools in the country, high grade preparatory and collegiate work was done here and scores of young men and women received all the training they ever had within its historic walls and went out to battle with the problems of life.”

The West Tennessee Seminary Institution, which was chartered by the Methodist Church in 1875, moved from Huntingdon to Hollow Rock finally landing in McLemoresville as part of the McLemoresville Collegiate Institution in 1887.

In 1913-1914, the old building was demolished and a new building was constructed. The Methodist Board of Education and the Methodist Episcopal Church aided in the funding of the school. The arrangement continued until 1927 when the Methodist Church withdrew the aid and public transportation for all schools in the county was established.

The institute transitioned into a public high school until 1946 when high school students were bused to the larger school at Huntingdon and Trezevant.

Then there is the Southern Normal University which transitioned into the Industrial and Training School later becoming Huntingdon High School. In 1890, a location was sought for a “well-equipped college which would draw patronage from all over the South and the West.” The normal school in essence would serve mostly as a preparatory high school and a “teacher-training college” or “teachers’ college”.

Eventually, Huntingdon was selected as the site from a long list of locations in West Tennessee that included Paris, Jackson and Memphis. The campus sat on 12 acres of elevated land with buildings valued at $30,000 at the time of construction (a $1 million cost in 2021).

Opening in October 1891, the following comes from the archives of the Carroll County Democrat:

“Last Tuesday was a red-letter day in Huntingdon. It was a day that has been looked forward to with much anxiety since it has been an assured fact that the Southern Normal University would be located here. It was the occasion of the opening of that institution of learning. Its friends and everybody here are its friends, feared that the postponement of the opening from the first of September to the fifteenth of October would greatly insure it, but it seems that those fears were not well-founded for the opening was a success.

“Tuesday morning at nine o’clock 300 students had entered the university hall and reported for matriculation. Of this number fully 100 are nonresidents of Huntingdon. Students are still coming and by Christmas, there will be between 150 and 250 boarders.

“The public exercises at the university hall were largely attended, the crowd being estimated at from 800 to 1,200 people.

By the end of October 1891, it was noted over 840 students were enrolled in the Southern Normal University.

After 11 years in operation, the school was heavy in debt and saw no way out of the red. To keep the school in Huntingdon, the town purchased the property. By 1902, the Town of Huntingdon made sure the properties were properly maintained.

In 1908, J.H. Bayer bought the properties and reopened the school as the Industrial and Training School. The school was a member of the Association of College and Preparatory Schools. The following comes from the school’s 1910-1911 catalog:

“This institution is located in the town of Huntingdon, Tennessee, a beautiful town of about 2,000 inhabitants and the county seat of Carroll County. It is located on the Nashville and Chattanooga Railroad, about midway between Nashville and Memphis. Huntingdon is one of the most beautiful and cultured towns to be found anywhere. The loyal support it gives the school is excellent, a fact thoroughly verified by all students who have ever attended school here.

“The site of the Industrial and Training School is a beautiful one and receives the admiration of all who see it. The large rolling campus, with its beautiful shade trees in front and handsome imposing structure in the distance, presents a picturesqueness that is within itself an inspiration.

“The school is on the eastern border of the town and may be reached from the depot going one block north on Harrison Avenue (now Thomas Park on East Main Street)...

“The term ‘industrial’ conveys the idea of work — physical as well as mental. At present, the industrial features are limited to those that are practical and directly beneficial to the school. Labor is dignified. The trained hand and the willing heart, as well as the educated mind, are respected. These would go hand in hand.”

In 1918, J.H. Bayer left the school. Instead of shuttering the facility it became Huntingdon High School. John Hendrickson was the first superintendent from 1918-1919 followed by Dr. D.W. Moody from 1919-1938. The buildings remained in use before being declared condemned and forcing construction of a new school in 1935.