GREENFIELD — After a week off, the West Carroll War Eagles entered the last leg of their regular season with a trip to Greenfield for a region matchup with the Yellow Jackets. With state playoffs looming in a few weeks, this game would help settle third and fourth place in Region 7A. 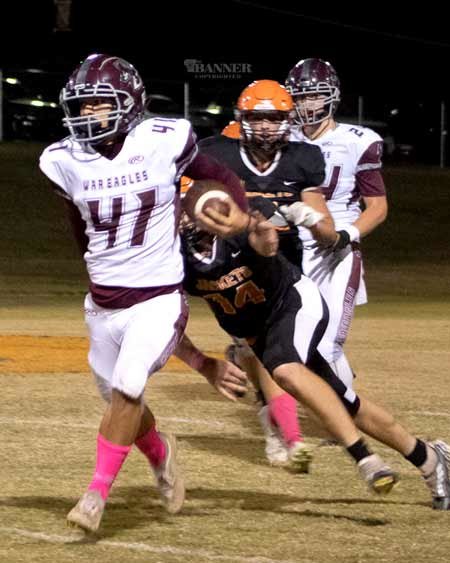 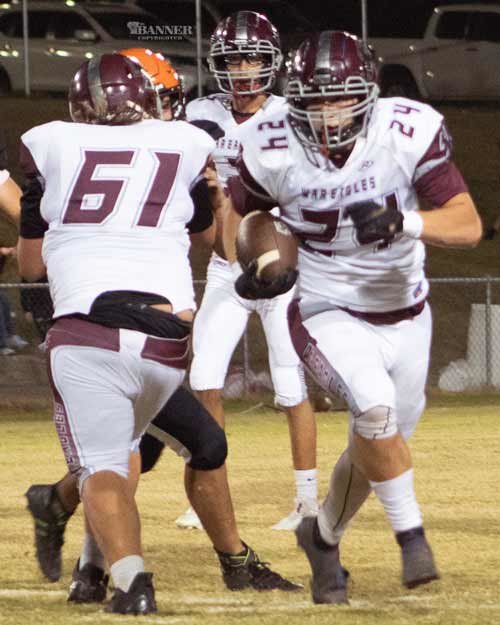 Nate Wycoff finds running room against Greenfield
Previous Next
Posted Tuesday, October 18, 2022 12:51 pm
By Jim Potts
jpotts@mckenziebanner.com
GREENFIELD — After a week off, the West Carroll War Eagles entered the last leg of their regular season with a trip to Greenfield for a region matchup with the Yellow Jackets. With state playoffs looming in a few weeks, this game would help settle third and fourth place in Region 7A.
The War Eagles won the toss and elected to take the ball first. After a good kickoff return, West Carroll began an eight-play drive resulting in the game’s first points on a 20-yard touchdown run off the left side for Jay Long. Long tacked on the two-point conversion run giving West Carroll an early 8-0 lead with 7:45 left in the first quarter.
Greenfield’s first possession was a short one going three and out. West Carroll took the punt and returned it to the War Eagle 43 yard line. They didn’t keep it long due to a fumble recovered by the Yellow Jackets. Penalties and West Carroll’s defense made the possession another quick one by Greenfield. The War Eagles took the ball at their own 37 and chewed up the rest of the first quarter clock on a drive that resulted in another Jay Long touchdown. This one came on a 23-yard run down the right side with 10:37 left in the second quarter. Jose Martinez was good on the extra point increasing the score to 15-0 for the War Eagles.
Greenfield’s third possession got them inside the West Carroll 15-yard line where they stalled out and failed to convert a first down on a fourth down play. The War Eagles took over on their own 14-yard line and stayed with their ground game driving to the West Carroll 11 before their only pass of the drive was intercepted by Greenfield with just under two minutes left in the second quarter.
West Carroll got the ball back shortly before the first half ended and got close enough for a field goal attempt which fell just short on the final play of the half with West Carroll leading 15-0.
Greenfield got a good return on the second half kickoff. Starting from their own 41, they reached midfield before fumbling the ball with West Carroll recovering at the War Eagle 49. On first down, Jay Long took it 49-yards for his third touchdown of the night. Nate Wycoff scored a two-point conversion to make it a 23-0 contest in favor of West Carroll.
West Carroll scored two more times during the third quarter. The next one came after a West Carroll sack ended a Yellow Jacket possession and moved the ball back to near midfield where Jay Long took it 57 yards for a score. The PAT was good by Martinez making the score 30-0 for the War Eagles. The next score came on a 26-yard Jay Long touchdown with little time left in the third period. The PAT was good for a 37-0 War Eagle lead.
In the fourth quarter, West Carroll hit the end zone one final time when Long scored another 26-yard touchdown with 2:24 left in the fourth quarter. The PAT was good for a 44-0 final score.
The War Eagles ran 50 plays for 425 total offensive yards. 410 of those yards were rushing and 15 yards passing. The West Carroll defense held Greenfield to -1 yard rushing and 68 yards passing. West Carroll’s Jay Long had a huge night with 24 rushes for 345 yards and six touchdowns.
West Carroll travels to Scotts Hill this Friday while Greenfield travels to Gibson County.