ATWOOD — West Carroll’s War Eagles got their ’22 season off to a good start with a 50-20 win over the Bruceton Tigers. 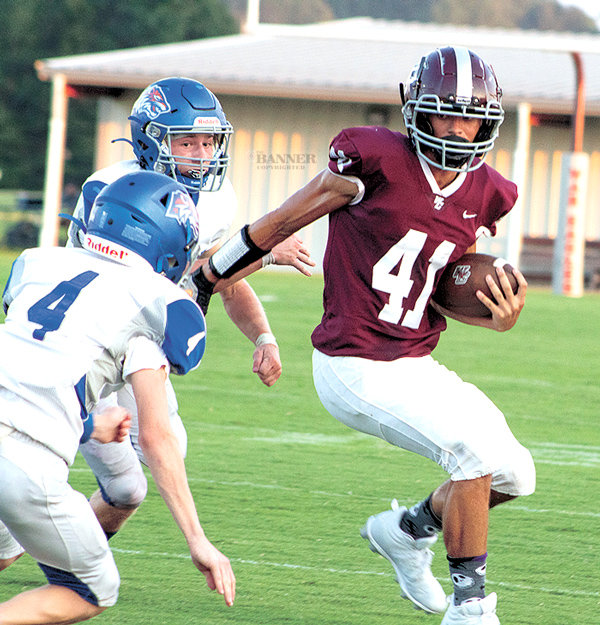 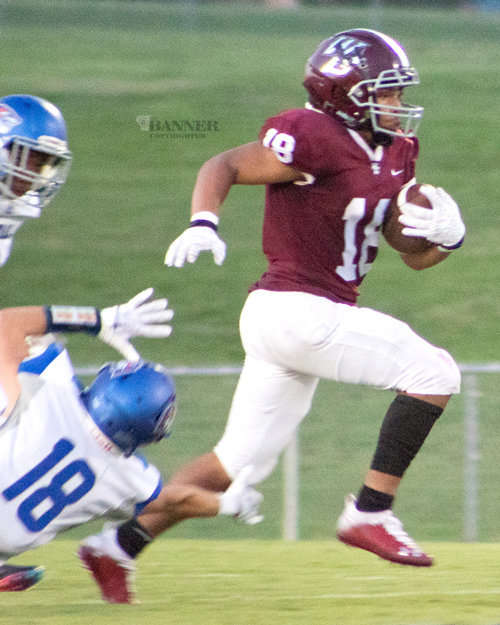 Jayden Milton (18) evades Bruceton defender Caden Dean (18).
Previous Next
Posted Tuesday, August 23, 2022 12:21 pm
By Jim Potts
jpotts@mckenziebanner.com
ATWOOD — West Carroll’s War Eagles got their ’22 season off to a good start with a 50-20 win over the Bruceton Tigers.
After winning the toss, West Carroll received the kickoff and fumbled at their own 35 with a Tiger jumping on the loose ball. A few plays later, the War Eagles got the ball back on a Tiger fumble but their possession didn’t make it far due to penalties. They were forced to punt and downed the ball just inside the Bruceton 15 yard line.
Bruceton made some progress on the ground but ended up turning the ball over on downs at their own 35 yard line. After converting a first down at the Tiger 16, War Eagle quarterback Jaxon Mims hit Nate Wykoff for a 16-yard touchdown strike with 1:30 left in the first quarter. The extra point attempt by Jose Martinez was no good leaving West Carroll with a 6-0 lead.
Bruceton fumbled the ball on the kickoff again with the War Eagles recovering near the end of the first quarter but didn’t keep it long. Bruceton started the second quarter with possession in their own territory and lost yards on two tackles that cost them 13 yards. Facing a 3rd and 25, the Tigers Brady Roberts completed a 15-yard pass and then a 21-yard pass to get a first down at the War Eagle 34. Bruceton drove deeper gaining a 1st and Goal at the West Carroll 8 yard line. The Tiger’s Preston Hollingsworth took it the remaining 8 yards for their first score with the extra point good for a 7-6 Bruceton lead with 4:50 left until halftime.
West Carroll answered just seconds later with a 70-yard run down the sideline by Jayden Milton. The 2-point conversion attempt failed giving the War Eagles a 12-6 lead with 4:24 left in the half. Both teams swapped possessions with West Carroll running out the second quarter clock taking a 12-6 lead into halftime.
Bruceton returned the second half kickoff 50 yards to the War Eagle 42. Tiger Brady Roberts found Preston Hollingsworth for a 42-yard touchdown pass less than a minute into the quarter. The extra point was good for a 14-12 Tiger lead. The War Eagles answered quickly with a long kickoff return followed by a 22-yard touchdown by Jayden Milton with the 2-point conversion attempt no good retaking the lead 18-14.
The Tigers converted a fake punt on fourth down during their next possession but ended up punting the ball back on a 4th and long play. With the ball at the War Eagle 46 yard line, Milton took off for a 54 yard touchdown with 4:13 left in the third quarter. Their two-point conversion was no good increasing the West Carroll lead to 24-14.
A short time later, the Tigers were on the board again on a 52-yard touchdown pass from Tate Crews to Preston Hollingsworth with the extra point attempt no good but closing the West Carroll lead to 24-20 with 2:45 left in the third quarter. The War Eagles ran the clock out on the third period reaching into Tiger territory.
War Eagle Jay Long capped the drive with a 16 yard touchdown run on the first play of the fourth quarter. Jose Martinez nailed the extra point for a 31-20 lead with 11:27 left in the game. Seconds later, Bruceton fumbles the kickoff with West Carroll’s Cornelius Cannon scooping up the ball scoring a 6 yard touchdown with 11:10 left in the game. Jaxon Mims attempted a 2-point conversion run and was stopped just short with the new score 37-20.
West Carroll got the ball back a short time later with Ben Pruitt intercepting a pass near midfield. The War Eagles found the endzone again following a short drive capped off by a 2-yard touchdown run by Jay Long with 7:07 left in the game. Jose Martinez connected on the extra point making the score 44-20 for the War Eagles.
After another Bruceton turnover, West Carroll’s Zach Hames scored on a 13-yard touchdown with 2:42 left in the game. Jose Martinez attempted a 2-point conversion which was stopped short as the War Eagles reached the 50-point mark.
The War Eagles rushed 41 times for 364 yards and had 54 yards passing for 418 total offensive yards. Jayden Milton led the way with 24 touches for 253 yards and three touchdowns. Jay Long had 10 carries for 66 yards and two touchdowns. West Carroll’s defense held Bruceton to 38 rushing yards but gave up nearly 200 yards passing. West Carroll travels to Gleason this week for a 7 p.m. kickoff.