McKENZIE (December 1) — Westview Lady Chargers (Class 2A) and McKenzie Lady Rebels (Class 2A), both state champions in their respective divisions, met in McKenzie for a rematch of the 2021 game that resulted in only one of two losses en route to the school’s first ladies basketball championship. 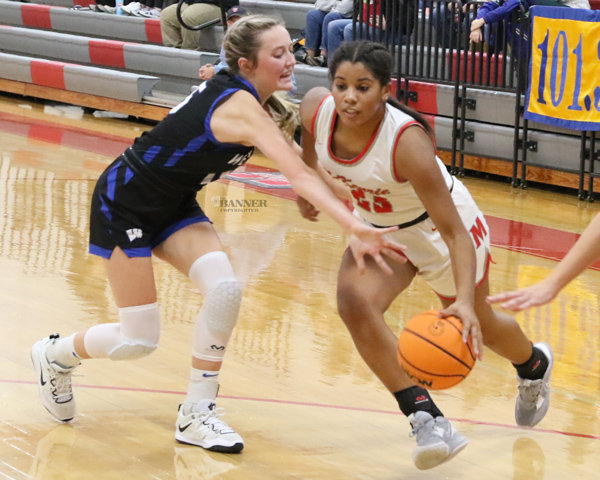 Kylie Reynolds drives toward the basket for the Lady Rebels. She was the high scorer with 18 points on the evening.
Posted Tuesday, December 6, 2022 3:08 pm
McKENZIE (December 1) — Westview Lady Chargers (Class 2A) and McKenzie Lady Rebels (Class 2A), both state champions in their respective divisions, met in McKenzie for a rematch of the 2021 game that resulted in only one of two losses en route to the school’s first ladies basketball championship.
Westview again took the win with a 55-48 hard earned victory.
The contest also resulted in the sidelining of Class 1A Miss Basketball Savannah Davis of McKenzie, who sustained a hand injury. She played only the first quarter of the contest. Surgery is this week for Savannah and she is expected to return to action prior to tournaments in 2023.
McKenzie scored 10 points, with Davis having a 3-pointer and a field goal as her only scores in the contest.
Sisters Mikaela (2 points) and Kylie Reynolds (3-pointer) scored in the first quarter for a total of 10 team points in the first quarter.
Katie Chesser and Sophie Pate each had three-pointers in the second quarter for a total of six points; Hannah Dillingham had a three-pointer, Briley Auvenshine had 2 points, and Mikaela Reynolds had two three-pointers. Kylie Reynolds had five points including a free throw. The third quarter included a three-pointer by Hannah Dillingham, Briley Auvenshine with 2, Mikaela Reynolds with two three-pointers, and Kylie Reynolds with two field goals and a foul shot for a total of 16 points. The final quarter netted the Lady Rebels 16 points with two free throws from Dillingham, four free throws by Auvenshine, and four free throws and two field goals for Kylie Reynolds. The Lady Rebels were 11 for 11 on free throws.
The Lady Chargers earned scores on with seven points from Jillian Brigance, three from Mary Anna Chester, 17 from Jada Harrison, 11 from Kylee Alexander, 14 from McCall Sims, and 3 from Halle Trevathan for a total of 55 points. Westview was 11 of 15 free throws.
There was no boys’ contest because the Rebels (and cheerleaders) were in Chattanooga preparing for the championship game on Friday. The Rebels earned their first-ever state football championship on Friday.