McKENZIE (November 19) —The No. 4 Bethel Wildcats saw their season come to a close with a 27-17 loss to No. 12 Keiser Saturday at Wildcat Stadium in McKenzie. 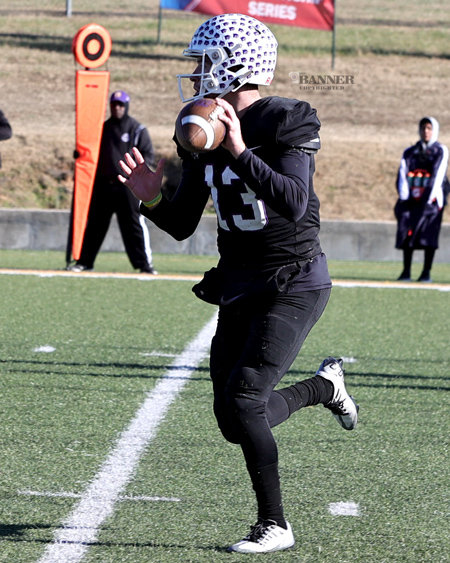 Bethel’s Joaquin Collazo III looking downfield to throw.
Photo by Joel Washburn/The Banner Photo by Joel Washburn/The Banner
Posted Tuesday, November 22, 2022 3:45 pm
Courtesy Bethel SID
McKENZIE (November 19) —The No. 4 Bethel Wildcats saw their season come to a close with a 27-17 loss to No. 12 Keiser Saturday at Wildcat Stadium in McKenzie.
Two first half touchdowns tosses by Joaquin Collazo III to Davius Prather and a 32-yard field goal by Austin Abbott as time expired in the half gave the Wildcats a 17-7 lead at the break. A Jaden Meizinger nine yard run accounted for Keiser’s score.
Neither team scored in the third quarter. What proved to be a big turning point in the game however came late in the quarter. Collazo hit Prather for a 45-yard completion to the Keiser one-yard line. The Seahawk defense stepped up big stopping the Wildcats on four straight plays.
In the first minute of the fourth quarter, taking over at their own four yard line, the Hawks put together a 96-yard drive capped off by Shea Spencer 71-yard touchdown pass to tight end Jaylen Arnold. With his team trailing 17-14 Spencer struck again at the 8:36 mark as he found Michael Robinson on a 62-yard pass to give the Seahawks their first lead at 21-17. Two field goals by Chance Gagnon would prove to be too much for the Wildcats to overcome as Keiser pulled off the upset.
Spencer finished with 211 passing yards. Meizinger rushed for 166 yards and was named the offensive player of the game. Arnold had 107 receiving yards.
Collazo had 254 passing yards. Prather and JD Dixon each had seven catches for over 100 yards each.
Mistakes proved to be costly for Bethel. Keiser picked off two passes and a Bethel fumble worked to the advantage of the Seahawks.
The Wildcats had 254 yards in passing but only 21 yards in rushing. Keiser used a balanced attack to win with 212 yards on the ground and 211 in the air.
Keiser’s Wendol Philford who was named the defensive player of the game had ten total tackles, a sack and 1.5 tackles for loss.
Bethel senior Jakobe Griffin who finished his fabulous career as the all-time program leader in tackles had 15 stops for the Cats.
Bethel which had set program history with an undefeated 11-0 mark finished at 11-1. Keiser won their seventh straight and moved to 8-3. The Seahawks will travel to No.1 Morningside (IA) next Saturday.
Coach Michael Jasper in his postgame radio interview spoke about the game and his squad. “I am so proud of these young men and my staff. We made mistakes at times but credit Keiser on a hard-earned win. We are all hurting right now. I thanked the seniors for what they have meant to me and this program. I also told the guys coming back to remember what this feels like to see a team come in and celebrate on our field. We will hit the recruiting trail and be back to challenge again next year. Thanks to everyone at our school and our fans for their support.”