McKENZIE — The No. 8 Bethel Wildcats returned to the friendly confines of Wildcat Stadium Saturday night to host the Patriots of the University of the Cumberlands. 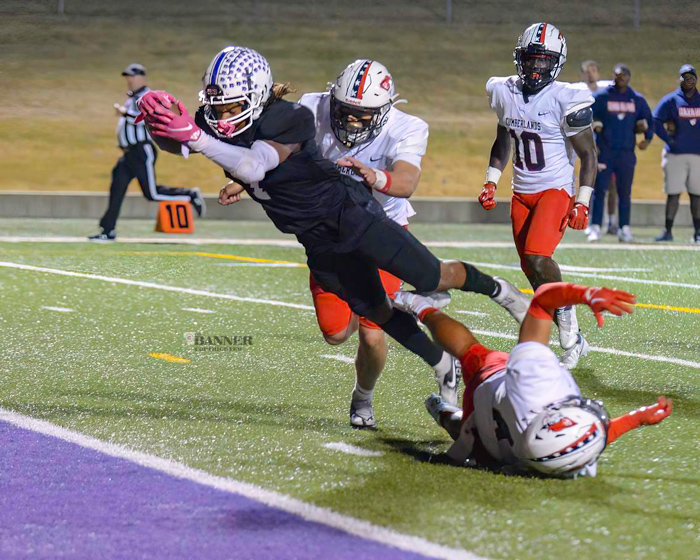 Avont Burrus (7) diving into the endzone for a touchdown.
Photo by Gary Owens 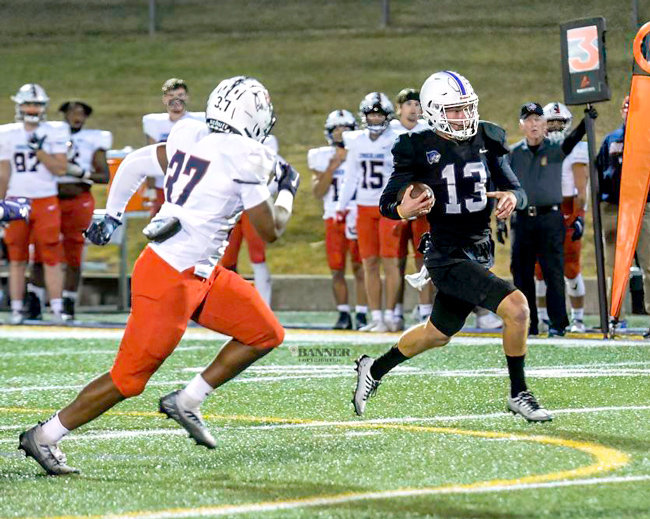 #13 Quarterback Joaquin Collazo III running for a 1st down.
Photo by Gary Owens
Previous Next
Posted Tuesday, October 11, 2022 3:11 pm
McKENZIE — The No. 8 Bethel Wildcats returned to the friendly confines of Wildcat Stadium Saturday night to host the Patriots of the University of the Cumberlands.
The Cats handed head coach Michael Jasper a birthday present with their 43-13 win over the visitors from the Commonwealth. Bethel moved to 6-0 and 3-0 in the MSC. UC dropped to 3-3 and 1-3.  It was the 12th meeting between the two programs with the Patriots holding an 8-4 advantage in the series.
UC got on the board first blocking a Bethel punt.  UC’s  Damon Byrnes-Mitchell  blocked the punt, which was recovered by Adam Foulk, who ran it into the endzone for a score putting Cumberlands in front 7-0.  The Wildcats responded with a 14 play, 80 yard drive which was capped off by a one yard rushing score by Quashawn Ford. The point after was no good. Bethel trailed 7-6 after one.
The Wildcats took the lead at the 11:36 mark of the second quarter on a Terrance Roberts 12-yard touchdown run. The two-point conversion attempt failed but Bethel led 12-7. Joaquin Collazo found Avont Burris from 20 yards out and the Cats extended their margin to 18-7. Austin Abbott nailed the point after and Bethel led 19-7.  After UC scored to pull the Patriots to within 19-13, the Cats took a 22-13 lead on a 36-yard field goal by Abbott as time expired in the first half.
Bethel scored 21 unanswered points in the second half to win 43-13. Scores included a Taylor Yancy five-yard scoring run. Collazo teamed up with Kenny Williams on a six-yard touchdown pass. Collazo then connected on a 52-yard scoring strike to Davius Prather with 9:46 left for the final points of the night.
Bethel put up a season high 642 yards in total offense. The Cat defense held UC to just 150 yards in total yardage.  Collazo was 30-of-55 in passing for 463 yards. Roberts had 94 rushing yards. Burrus caught seven passes for a career high 165 yards. Prather had three receptions for 77 yards while Cobey Johnson caught five passes for 77 yards.
Vonte Bates and Brody Franks led the defense with six total tackles each. Brandon Moore had an interception for the Wildcats.
Coach Jasper was pleased with the win. “Give the Patriots credit as they came to play. We had to earn this win as you always must do in this league. I thought we really picked things up in the second quarter. We became more aggressive on both sides of the ball, and it paid off. I thought Avont Burris was a huge factor. Collazo did a lot of good things and the defense was great again this week. We will get back to work Monday and get ready for Campbellsville.”
The Wildcats travel to Campbellsville to battle the Tigers. Kick-off is scheduled for 12 p.m. CST.