Story of Carroll County: Part I

Story of Carroll County: Part I 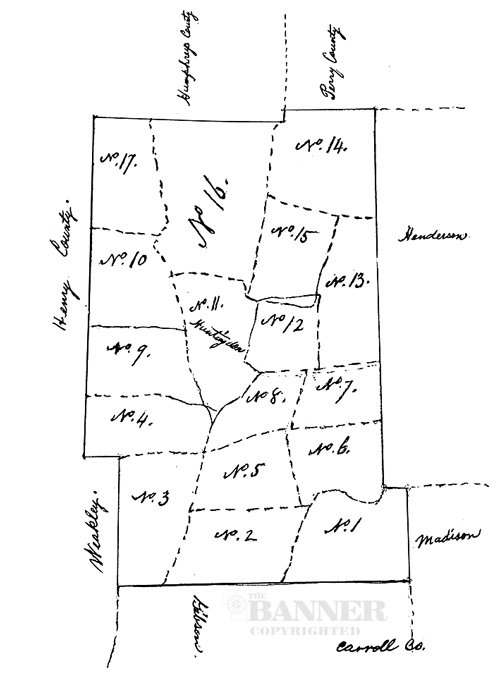 A map of the 17 districts within Carroll County. 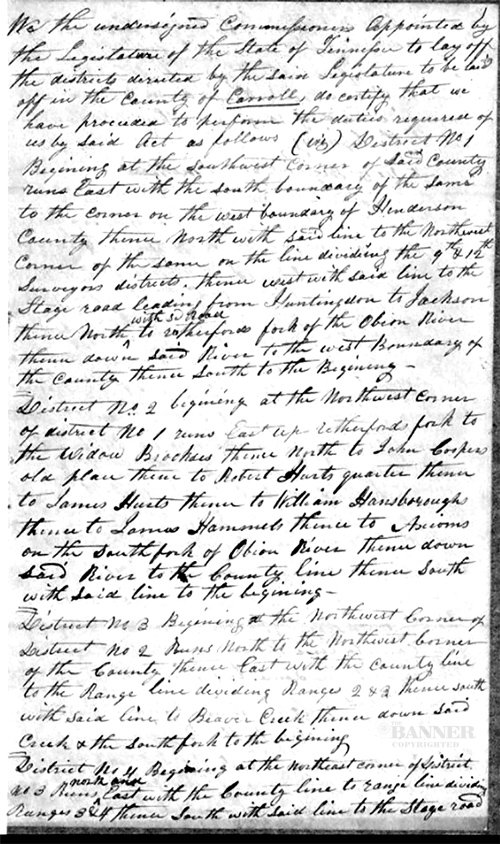 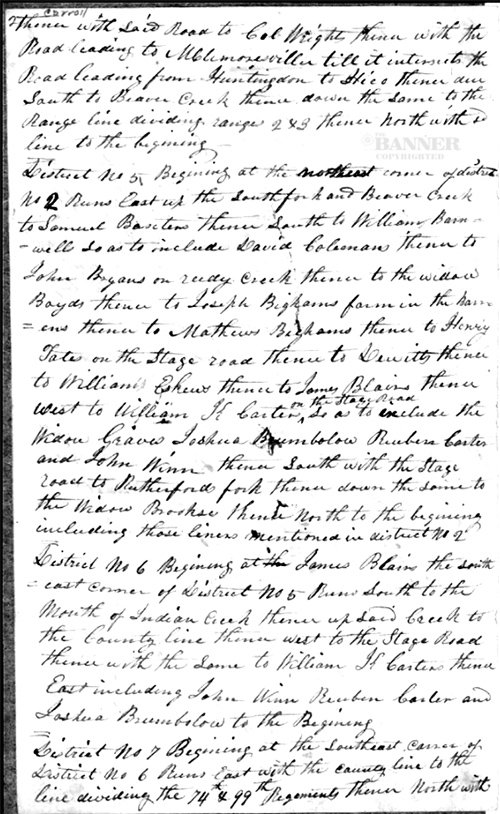 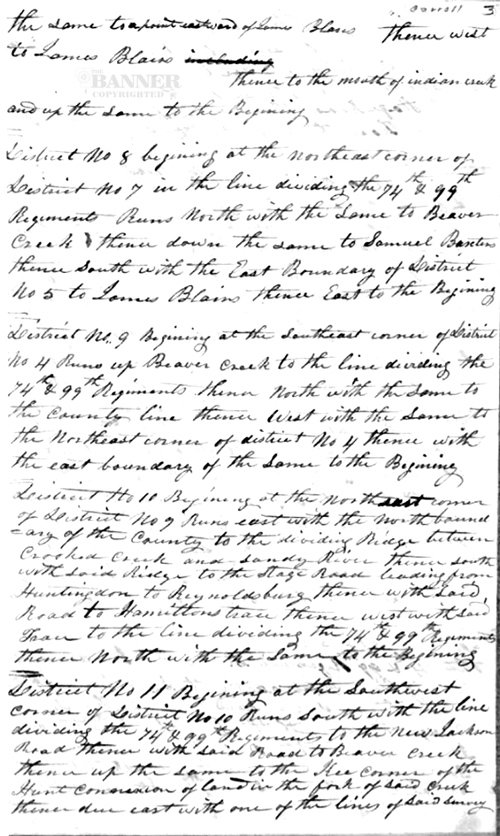 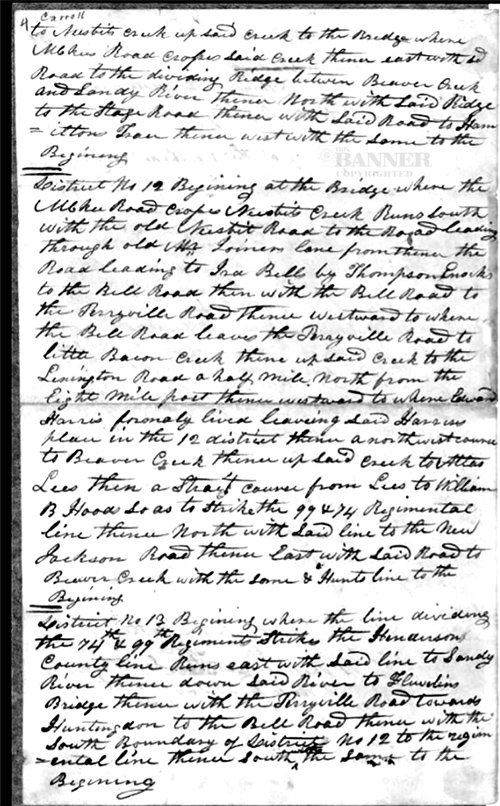 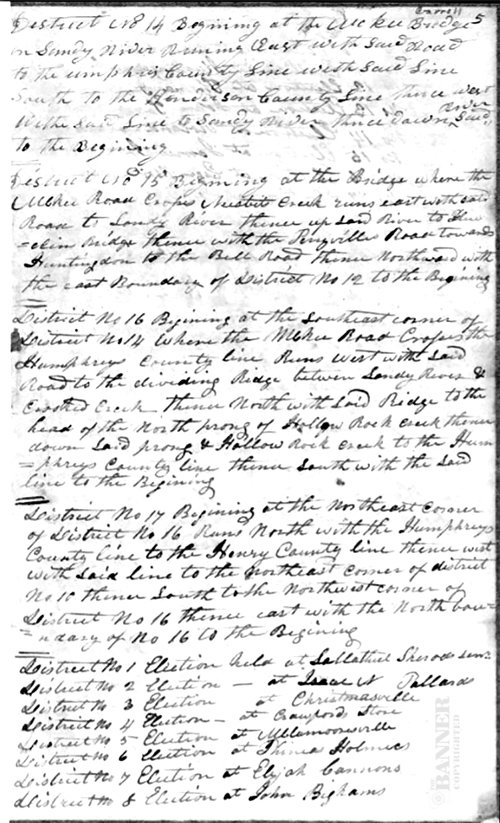 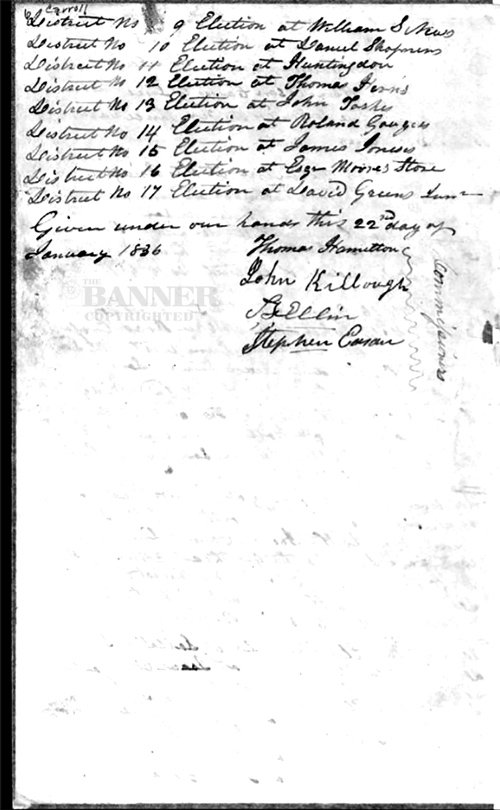 The handwritten and signed text used to describe the boundaries of the 17 districts set within Carroll County.
Previous Next
Posted Tuesday, November 2, 2021 9:36 am

The State of Tennessee came to be in 1796, but West Tennessee was not acquired until 1818 through the Jackson Purchase. The Chickasaw were given $300,000 (about $6.5 million in today’s inflation rate) in return for the territory of western Tennessee and southwestern Kentucky, bordered by the Tennessee River on the east, the Ohio River on the north, and the Mississippi River on the west.

There were no roads into what became Carroll County, only a few Native American trails and river transportation. McLemore’s Bluff on the South Fork of the Obion River was known as Surveyor’s Post No. 2.

By 1819, R.E.C. Dougherty was appointed land entry taker in what is present-day McLemoresville. The first entry in the land book was December 20, 1820, for David Gillespie.

On November 7, 1821, the Tennessee State Legislature passed an act creating Carroll County in honor of Governor William Carroll. The same legislation created the counties of Henry, Hardin and McNairy. Sterling Brewer, James Fentress and Abram Murray were appointed commissioners at the center of each of the counties to procure at least 50 acres of land to serve as the county seat.

The second-order directed Samuel McClary to make a list of taxable property south of Rutherford’s fork of the Obion River; Thomas Hamilton all north of the south fork; John Stockard all west of the dividing ridge (the waters of the Sandy and Obion River and between the south fork and Rutherford’s fork), John Bone all east and north of Sandy bridge, and Samuel Ingram south of the Sandy bridge.

On the second day of the court, Edward Gwin was appointed clerk, Sion Rogers as sheriff, Littleberry W. White as register, William Adams as a ranger, Banks Burrow as trustee and John Neely as coroner. It seems the first round of controversy came with the selection of sheriff, Mark Roberts claimed to have been elected on the grounds of an error in filling out the names of the justices in the commission. The court upheld the decision of Rogers.

John Cook, Daniel Murray and Richard Allen were the qualified attorneys and admitted to practice law before the court. The first law licenses issued in the county were to William Arnold, Robert Hughes, Will Stoddard and James Jones. Arnold produced a commission from Governor Carroll appointing him Solicitor General of the 13th Solicitorial District.

Banks Burrow, Thomas Thompson, John Stockard, Samuel Ingram and Mark Roberts were appointed to lay out the county seat and the rent/leasing of the public buildings and selling of lots.

On April 1822, the following is a prepared report to the court on the selection for the “Seat of Justice” for Carroll County:

“To the Honorable Justice of the Court of Pleas and Quarter Sessions for the County of Carroll all agreeable to an act passed the last sessions of the General Assembly in appointing Commissioners to establish the site for the Seat of Justice for the said county in the Western District, we have proceeded to fix on the same for this county on the lands of Memucan Hunt’s heirs lying on the North Bank of Beaver Creek covering a bluff of the same but will require some time to correspond with the heirs to enable us to pursue a title to the same and will do as soon as practicable and make transfer to the Commissioners which you may appoint to transact the duties you may assign them.”

Thus began the development of the Carroll County Seat of Justice, Huntsville. In December of 1823, the county seat of Huntsville changed its name to Huntingdon.